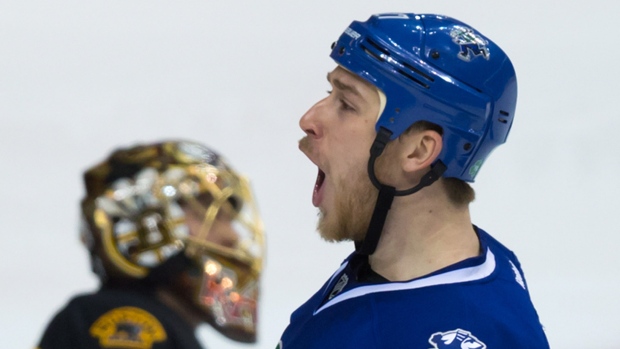 The bruising centre scored three times with his dad looking on Friday as the Vancouver Canucks downed the Boston Bruins 5-2.

Matthias buried two beautiful goals early and then added an important third that bounced in off a Boston defenceman just 24 seconds after the Bruins had cut the lead to 3-2 in the final period.

Fans at Rogers Arena littered the ice with hats, and Brian Matthias was shown on the big screen flashing three fingers moments later as a nod to his son's accomplishment.

"It was a fun night and it was cool to see my old man up there," said Matthias. "I didn't want to look because I didn't want to start laughing. Then he threw up the three."

Radim Vrbata and Jannik Hansen, into an empty net, had the other goals for Vancouver (31-20-3), while Zack Kassian added two assists.

"Pretty goals," Miller said of Matthias' performance. "Nice setup on the first one, great patience on the second, and it's going well when he gets that third one.

Patrice Bergeron and Chris Kelly replied for Boston (28-20-7), which got 20 stops from Tuukka Rask on a night when turnovers cost the Bruins dearly.

"Those mistakes we did in our own zone, you can't do that in peewee hockey, let alone in the NHL," said Rask. "If you make those mistakes nothing good is going to happen."

Kelly got Boston to within one at 5:41 of the third with his seventh, but Kassian — who now has five points in his last four games after being a healthy scratch for three straight — pounced on a giveaway by Dennis Seidenberg and fed Matthias in front on the next shift.

Rask made a great save on the initial shot, but the puck went off Seidenberg and over the line as Matthias celebrated his 13th goal of the season that made it 4-2.

"It was surreal. Such a fun rink to play in, in front of our home fans," he said. "I'll remember it for a long time."

Hansen then lofted an empty-net goal from his own zone with two minutes to go for his 11th.

Miller was pulled after allowing five goals on 18 shots in Monday's 5-3 loss to Minnesota, but rebounded after watching Eddie Lack backstop Vancouver to a 5-4 overtime victory against Chicago on Wednesday.

"That's how you picture it. You want to bounce back and just be solid," said Miller. "I thought the boys were really sharp in front of me."

The Canucks led 2-1 through 20 minutes and came out flying in the second — directing the first 10 shots of the period on Rask — before Vrbata stretched Vancouver's lead at 9:26 with his 21st.

The game was another rematch of the 2011 Stanley Cup final that Boston won in seven games, and although each side has a lot of new faces, Friday's contest was a physical and fast-paced as both teams continue playoff pushes in their respective conferences.

Matthias opened the scoring at 1:41 of opening period on feed from Kassian before jumping on the first of many Bruins giveaways and outwaiting Rask to score his second at 5:03.

Boston got one back when Bergeron scored his 16th of the season at 9:38, but this night would belong to Matthias.

"We have so many great players on our team and I'm just happy to contribute," he said. "I want to be a part of this team moving forward and keep getting better with this team. It's brought the best out of me."