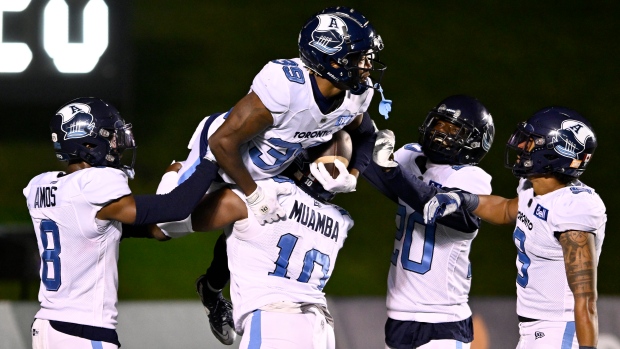 Maurice Carnell IV, Jake Maier and McLeod Bethel-Thompson are the Canadian Football League’s Top Performers for Week 16 of the 2022 season.

▫️ 2 INT with one returned for 𝟔

What a Week 16 for @MCarnell_The4th and the @TorontoArgos!

Toronto Argonaut teammates Carnell and Bethel-Thompson earned the honours for their performances in the Argonauts' 45-10, playoff-clinching win over the Ottawa Redblacks.

Carnell, 27, recorded a pair of interceptions, including one he returned for a 35-yard touchdown, along with five tackles and a knockdown.

It's the first honour of the season for the 34-year-old Bethel-Thompson, who completed 21 of his 29 passing attempts for three touchdowns. The fifth-year Argonaut leads the CFL in passing yards with 3,672 yards and is atop the league in completions with 302.

Calgary Stampeders quarterback Jake Maier is the lone player from the West Division as he earned the honour for his interception-less performance against the BC Lions.

The 25-year-old second-year signal caller out of UC Davis finished with 294 passing yards and 14 rushing yards.