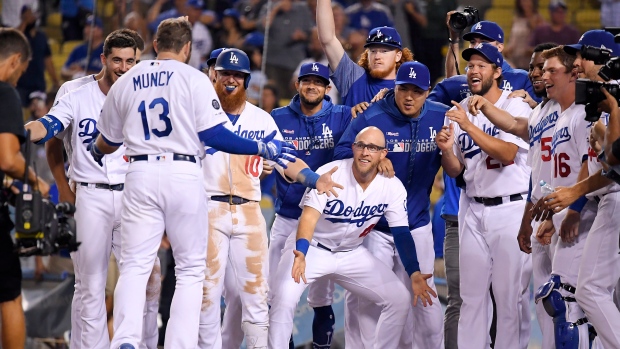 LOS ANGELES — Max Muncy homered in the bottom of the 10th inning to lift the Los Angeles Dodgers over the Toronto Blue Jays 2-1 Wednesday night for their 50th home victory of the season.

Will Smith also went deep and Walker Buehler threw seven shutout innings for the major league-leading Dodgers, who have baseball's best home record as well at 50-16.

Muncy sent his 33rd homer to centre field off Tim Mayza (1-3) with one out. The slugger picked up the Dodgers after closer Kenley Jansen gave up a tying homer to Rowdy Tellez with one out in the ninth. Fans booed Jansen after he got two more outs to end the inning.

Pedro Baez (7-2) got the win with one inning of relief.

A night earlier, the Dodgers pounded out 15 hits in a 16-3 victory highlighted by five home runs.

Buehler allowed five hits, struck out eight and walked none.

Joe Kelly retired the side in the eighth against a trio of second-generation major leaguers: pinch-hitter Vladimir Guerrero Jr., Bo Bichette and Cavan Biggio.

That set up Jansen, who couldn't get the job done.

Smith slugged his 12th homer on the first pitch from Zack Godley in the fourth. It was Smith's sixth homer in eight games.

Chris Taylor followed with a triple, but he got thrown out at the plate after outfielders Randal Grichuk and Teoscar Hernandez collided trying to field the ball.

It was a bullpen game for Toronto, with Wilmer Font starting and going two innings before Buddy Boshers lasted 1 1/3 innings.

Dodgers: RHP Ross Stripling (right biceps tendinitis) tossed his entire mix in a 25-pitch bullpen without soreness. He'll throw another 'pen in a few days and face hitters next week. ... RHP Dylan Floro went on the IL with a left intercostal strain a day after being recalled from the minors.

Dodgers: Kenta Maeda (8-8, 4.18) yielded three runs in the first 1 2/3 innings of his last start at Atlanta and struck out seven in a row at one point but didn't get out of the fifth inning.