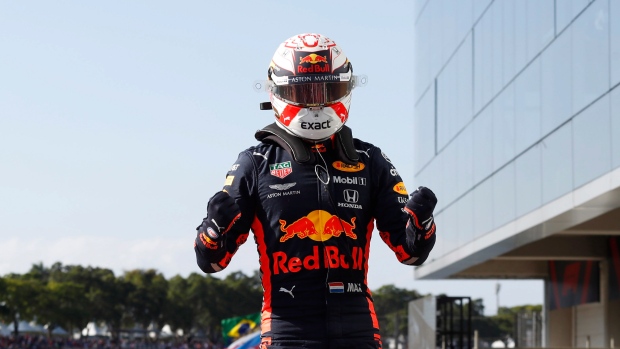 On a track where he made history as the youngest driver to win a Formula One race, Max Verstappen hopes to usurp world champion Lewis Hamilton again at the Spanish Grand Prix.

All eyes will be on Verstappen this week following his remarkable victory at Silverstone last weekend. The Red Bull driver finished more than 10 seconds ahead of Hamilton and his Mercedes teammate Valtteri Bottas, ending a run of three straight wins for Hamilton and four consecutive for the team.

Few saw the win coming, least of all Mercedes, whose tire issues under heat played into the ice-cool Verstappen's hands. He was given a glimpse of a chance and seized it with trademark confidence for a ninth career win — even joking with his race engineer over team radio on the last lap while others in the garage were chewing their nails.

“He was having some banter about hydrating and sanitizing his hands," Red Bull team principal Christian Horner said. "But that just showed how in control he was at the time."

Verstappen's dry wit is as sharp as his reflexes and a refreshing change from the stream of angry rants earlier in his career.

“Let’s keep this week’s (comment) a surprise, but I think we should keep it going,” the Dutch driver said.

Considering how Mercedes struggled to cope with tires amid unusually high temperatures for England, Red Bull's hopes of challenging Mercedes again in the searing heat of Spain are legitimate.

Mercedes, which dominates F1 the way Red Bull did from 2010-13, is acutely aware of that.

“We used the last few days to build a better understanding of the problem,” Mercedes head of motorsport Toto Wolff said. “Our performance seems stronger in slightly cooler conditions."

Mercedes struggled in Spain four years ago, although for very different reasons as feuding teammates Hamilton and Nico Rosberg crashed into each other three turns after the start and went out.

The opportunist Verstappen won that race on his Red Bull debut at the age of 18, stunning F1 viewers with the nerveless audacity of his driving. He secured six more podium finishes in a remarkable breakthrough year.

Now he wants a crack at Hamilton, who says he welcomes a sustained challenge from Red Bull.

“It’s great,” the British star said. “I want to have races where they are challenging."

Hamilton is chasing a seventh world title to equal Michael Schumacher’s record and leads second-placed Verstappen by 30 points in the standings.

Verstappen's problem is that a reliance on hot tracks is not enough to close the gap, given Hamilton's sizeable lead and in a calendar shortened by the coronavirus pandemic.

Furthermore, Verstappen needs a strong performance in qualifying, considering that 21 of the 29 races held at the venue have been won from pole position. Overtaking at the Circuit de Barcelona-Catalunya, with its blend of low-speed and high-speed turns, is very difficult.

Hamilton holds the F1 record with 91 career pole positions while Verstappen has just two — underlining how a speed difference between their cars remains a setback no matter how dazzling Verstappen's driving can be.

After sitting out both races at Silverstone while he recovered from the coronavirus, Mexican driver Sergio Perez will be back behind the wheel for Racing Point.

Perez was given the all-clear by governing body FIA after testing negative for COVID-19, ending Nico Hulkenberg's brief return to F1 as his last-minute replacement.

The four-time F1 champion has made the worst start to a season since 2008 and has yet to even finish in the top five. His final year with the proud Italian manufacturer is turning into an annus horribilis and he sits a dismal 13th in the standings with only 10 points.

Stretching back to the end of last season, he has failed to finish three of the past eight races and his last podium was a second place in Mexico nine races ago. For a driver with 53 wins that is a staggeringly poor return, even though his team is also at fault for inconsistent strategy allied to poor decision-making and myriad design problems.

He cut a disconsolate figure at last Sunday's race, telling them they “messed up” their calls and struggled to find answers as to why he finished 12th.

"Sebastian will have a new chassis because, after the Silverstone post-race analysis, we spotted a small fault caused by a heavy impact over a kerb,” the team's head of chassis engineering Simone Resta said. “It was the logical decision to take.”

Things might get better for Vettel in Spain, although they could hardly get any worse.