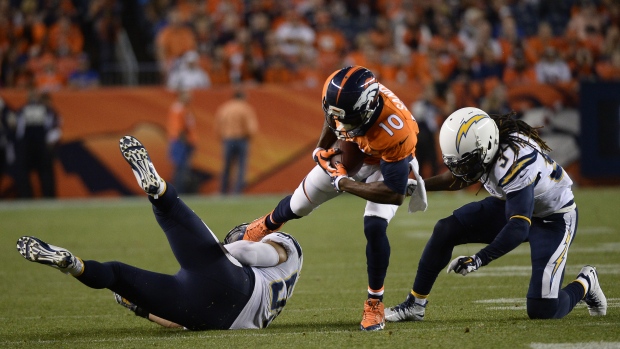 Addae immediately fell to the ground after a hit on the first play of the game. Late in the third quarter, he convulsed while remaining on his feet after a hit. He led with his left shoulder both times.

Addae said after the game that he passed the NFL's concussion test, but the team announced Friday night that he was diagnosed with a concussion.

"Like every player regardless of what the injury is, you monitor them throughout the game," McCoy said before the team announced the concussion diagnosis. "The first time he was checked out."

Addae's reaction to the second hit caused a stir on Twitter. Some compared it to when Chargers guard Kris Dielman was staggered after sustaining a career-ending concussion in a game in 2011.

"I understand the concern," McCoy said. "But there are a number of people that are out there that are doing their job and looking at all those things and evaluating players on the sideline. Same as every game for every team. There's a ton of people there evaluating that."

When asked to confirm there was no head trauma, McCoy reiterated that he had yet to meet with trainer James Collins. "I've said all I'm going to say about the whole football team with where we are right now," said McCoy, who loathes discussing injuries.

Asked if Addae will be able to play in the Chargers' next game, at Miami a week from Sunday, McCoy said: "We'll play the healthiest 46."

McCoy declined to give an update on rookie cornerback Jason Verrett, who left the game with a shoulder injury.

McCoy said the Chargers have "a lot to learn from a good football team."

Two weeks after a five-game winning streak had them sharing the NFL's best record with Philadelphia and Dallas, the Chargers (5-3) have lost two straight and trail the Broncos by 1 1/2 games in the AFC West.