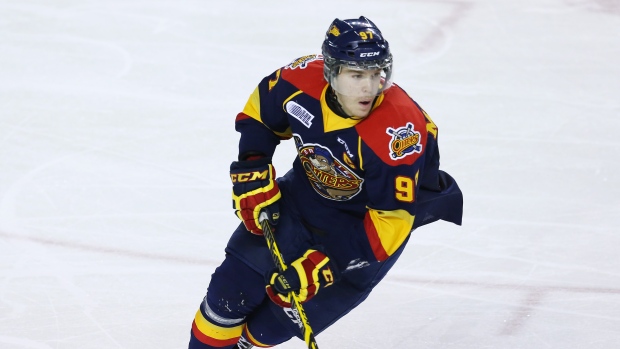 McDavid scored five times on Friday night to lead the Erie Otters to a 7-3 rout of the London Knights in Game 2 of their second round Ontario Hockey League playoff series.

The potential first-overall selection in this year's NHL draft had four of the first five goals before adding another in the third period. It was the first time any Otter had scored five goals in a regular season or playoff game.

Jake Marchment and Taylor Raddysh also found the back of the net for Erie, which leads the best-of-seven series 2-0. Remi Elie added three assists.

Devin Williams kicked out 21 shots for the Otters. Tyler Parsons started for London and made 13 saves in 20 minutes before being lifted. Michael Giugovaz turned aside 22-of-26 shots in 37:21 of relief.

The Otters were without Mason Marchment and Kurtis MacDermid. Both were suspended by the OHL earlier Friday.

Marchment was banned indefinitely for an elbow to the head of Knights player Mitch Marner on Thursday in Erie's 5-2 victory over London in Game 1. Marner was injured on the play.

MacDermid was suspended eight games for delivering a check to the head of Knights forward Max Domi in the same game. MacDermid was given a five-minute major and a game misconduct by on-ice officials.

The series shifts to London, Ont., for Game 3 on Sunday.

BARRIE, Ont. — Joseph Blandisi broke a tie in the third period to help the Colts take Game 1 of its second-round playoff matchup over North Bay.

Ryan Kujawinski and Nick Moutrey supplied the offence for the Battalion.

OSHAWA, Ont. — Michael Dal Colle scored twice and added an assist as the Generals got past Niagara in Game 1 of their second-round playoff series.

Billy Jenkins, Carter Verhaeghe and Johnny Cornell had goals for the IceDogs. Niagara's Vince Dunn received a match penalty for slew footing at 10:54 of the first period.

The Generals host Game 2 on Sunday.