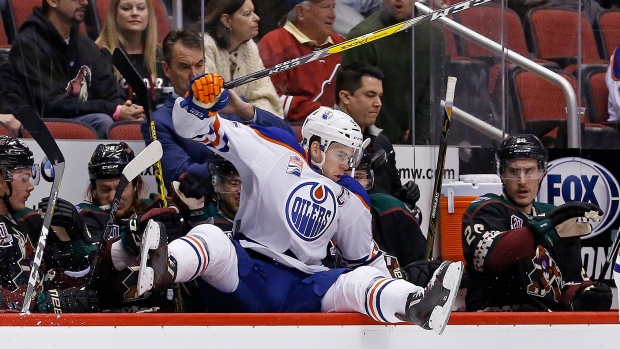 GLENDALE, Ariz. — The Arizona Coyotes escaped a loss by less than a tenth of a second, then turned to their go-to guy in the overtime shootout for another win over the Edmonton Oilers.

Radim Vrbata's 43rd career shootout goal and another from Oliver Ekman-Larsson helped give the Arizona Coyotes a 3-2 comeback victory over the Pacific Division leaders Oilers on Friday night.

"If you do it right there's a high percentage chance that it will work," Vrbata said of his goal, which preceded Ekman-Larsson's winner. "When it goes to a shootout and you're successful, you get a point that you might need at the end of the season."

The three-on-three overtime saw the Oilers go on a power play and fail to score, but Connor McDavid's shot beat Smith as time expired. The goal was disallowed on review, however, when officials deemed it did not cross the goal line before time ran out.

"That's about as close as I've ever seen," Coyotes coach Dave Tippett said of McDavid's no-goal. "We were fortunate to get the extra point. You know your back's against the wall, you've got to leave it all out there and our guys did."

McDavid, who lost the puck on his shootout attempt, continued his productive season with a goal for his NHL-leading 28th point of the season. The 19-year-old McDavid, last season's first overall draft pick, has nine points over those four games, five on goals.

Arizona took a season-high 40 shots and played its sixth one-goal game of the past seven. The Coyotes have three overtime points from that span of games.

Cam Talbot finished with a season high 38 saves for Edmonton. The Oilers had won three in a row.

The Coyotes peppered Talbot with 20 first-period shots, the most they have had in a period this season. All but one were on net, and one of those finally went in with 2:22 left in the period.

"They were a lot sharper than we were in the first period and they gained some confidence and momentum off it," Oilers coach Todd McLellan said.

Domi lifted a shot over Talbot after a faceoff and four passes, 9 seconds after Edmonton had taken a 2-0 lead.

Larsson gathered in Oscar Klefbom's pass, with teammate Ryan Nugent-Hopkins letting the puck go past him to an open Larsson for the Oilers' second goal. McDavid scored just 1:31 into the game on a rush, taking Jesse Puljujarvi's pass, skating ahead of defenders and beating Smith 1-on-1 stick-side.

The Coyotes were denied a goal after a review in the first period, but tied it at 8:06 of the third period. Doan tipped in Anthony DeAngelo's shot after Doan won a face-off and got to the front of the net for the deflection.

That goal was also reviewed on replay but stood. Doan is two goals away from 400 for his career and scored his first goal since the season opener last month.

NOTES: Arizona called up G Justin Peters from Tucson of the AHL on an emergency basis to back up Smith, with Louis Domingue dealing with a lower-body injury. ... The Coyotes wore throwback "kachina" original uniforms from the late 1990s. ... Oilers F Patrick Maroon drew a two-minute penalty for boarding near the end of the first period when he crunched a bent-over Connor Murphy, prompting a brief scuffle. Murphy left the ice for the locker room but returned to action in the second period. ... Coyotes C Laurent Dauphin left the ice after getting hurt blocking a shot in the third period, but Tippett said Dauphin is OK.

UP NEXT: The teams meet again Sunday in Edmonton.