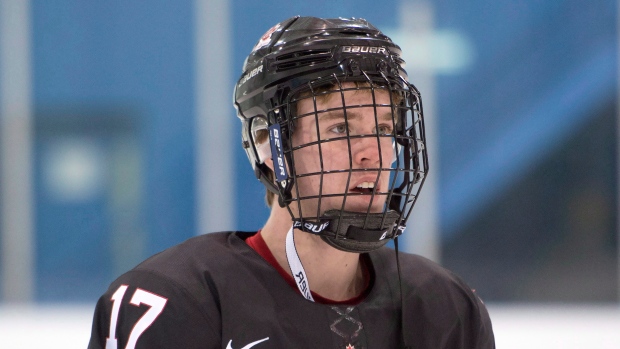 TORONTO - Connor McDavid's international coming-out party happened in April 2013 at the under-18 world championships. As a 16-year-old, McDavid set Canadian records for goals and points and won a gold medal.

"He was the best player in the tournament," said former NHL executive Craig Button. "He was dominant."

Fast forward to the world juniors, and as a 17-year-old, McDavid was arguably Canada's best player on a team with a handful of talented 19-year-olds. By improving as the tournament progressed, McDavid not only helped Canada win gold but widened the gap between himself and Jack Eichel and the rest of the 2015 draft crop.

"He's always been our No. 1 and he just kept getting better and better each game," said Dennis MacInnis, scouting director for ISS Hockey. "He just elevated his game as the tournament went along. I think he clearly separated himself."

McDavid did it all despite missing the previous six weeks with a broken bone in his right hand. After shaking off rust early in the tournament, the Newmarket, Ont., native had three goals and eight assists to tie for the tournament lead in scoring.

Those 11 points put McDavid in a tie with teammates Sam Reinhart and Nic Petan. Reinhart was the second overall pick of the Buffalo Sabres last year, and Petan is 19 years old and one of the Winnipeg Jets' top prospects.

McDavid was named one of the tournament's top three forwards. Excelling as a younger player, as Eric Lindros did at this age, made it even more impressive.

"Traditionally the draft-eligible players don't have a key role on a team," said Dan Marr, head of NHL Central Scouting. "They're expected to do their role on the team. Eichel and McDavid are in a different category all by themselves. They're expected to perform and be the better players on their team."

Eichel was the Americans' No. 1 centre and captain and put up a goal and three assists in five games. The U.S. lost to Russia in the quarter-finals, but Eichel wasn't to blame for the early exit.

"I believe Eichel is going to go on and he's going to be a star player as well," MacInnis said. "And he played well at this tournament too, Eichel did. He didn't play as well as McDavid did obviously."

Eichel didn't do anything to make scouts or analysts question his spot as the definitive No. 2 prospect for the draft, which will be held in Sunrise, Fla., on June 26-27. Even as Eichel starred as a freshman at Boston University, McDavid was always ISS Hockey's "clear-cut" No. 1 as he tore up the Ontario Hockey League with the Erie Otters.

After the world juniors, any debate that may have still existed should be over.

Hockey Canada president and CEO Tom Renney, a longtime NHL coach, saw McDavid as "a young player hitting stride and really living up to the billing of being an outstanding hockey player." His progression from the first game to the seventh made all the difference.

McDavid continues that pursuit Thursday night when he returns to the Otters to face the Sarnia Sting. A Memorial Cup run could be in the offing this spring, but McDavid doesn't have anything else to prove before he becomes the No. 1 pick.

Beyond him and Eichel, a handful of players stood out at the world juniors and improved their draft stock.

At the top of that list is Canadian winger Lawson Crouse, who rocketed to No. 3 on ISS Hockey's latest rankings. Crouse had a goal and two assists as a fourth-liner but at six foot four and 211 pounds, showed glimpses of playing a pro-style game.

"He's just a coach's dream," said MacInnis, who was impressed with how Crouse adapted to a checking role. "He went out there and did his job, already has a pro frame, lots of upside. I expect a real big second half from him when he gets back to the (OHL)."

Slovak goaltender Denis Godla, a 19-year-old who is draft eligible once again this summer, was the tournament MVP and likely did enough to get noticed. Finnish forward Mikko Rantanen also stood out, according to MacInnis.

"Big winger, good offensive skills, lots of upside, a great shot," MacInnis said. "He scored half of Finland's goals in this tournament. He really impressed all the scouts."

In ISS Hockey's post-world junior rankings, Rantanen is fifth behind McDavid, Eichel, Crouse and defenceman Noah Hanifin. There's some disagreement among scouts and analysts about Hanifin, and not standing out on the U.S. blue-line in Montreal didn't help his case.

Marr said he would draw a line under McDavid, Eichel and Hanifin before the next tier of players. NHL Central Scouting puts out its mid-season rankings Jan. 19.

"It's a very personal choice, a personal philosophy with the team," Marr said. "But could it happen? Sure, it could happen."