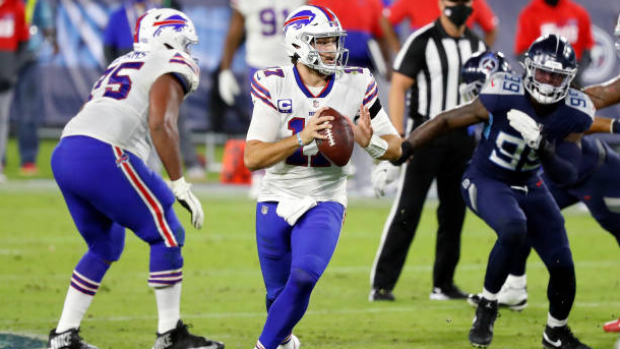 ORCHARD PARK, N.Y. — Sean McDermott’s professional coaching world came crashing down around him upon being fired by Andy Reid in Philadelphia following the 2010 season.

Already having difficulty coming to grips with being dismissed from his hometown dream job, and by his mentor, no less, McDermott couldn’t believe his ears when Reid suggested the setback would be beneficial in the long run for the then-36-year-old Eagles defensive co-ordinator.

“Oh, it crushed me early on,” McDermott would say in 2017, after landing his first head coaching job with the Buffalo Bills. “It crushed me from the standpoint of, I looked introspectively, just looked at myself and said, ‘What did I do wrong?’”

A decade later, the benefit of perspective has allowed McDermott to realize the wisdom behind Reid’s advice.

“Those are moments that you go through in life that you say, `You know what? I came out better because of it.’ And Andy knew that,” McDermott said this week in preparing the Bills (4-1) to host the Reid-coached Kansas City Chiefs (4-1) on Monday.

The two even joke about it now.

“Yeah, we kind of jab about it here and there,” McDermott said with a laugh. “But we can do that because he knew. He told me then, 'This is the best thing for you.' And he was right.”

At 46, McDermott has overseen a renaissance in Buffalo.

The Bills have made the playoffs in two of McDermott’s first three years, including 2017, when they snapped a 17-year post-season drought which had been the longest active streak in North America’s four major professional sports.

This year, despite a 42-16 loss at Tennessee on Tuesday, Buffalo is 4-1 or better in consecutive seasons for the first time since Hall of Fame quarterback Jim Kelly’s final two years in 1995 and ’96.

McDermott is getting much-deserved credit for instilling a professional, team-first culture on a franchise that lacked discipline and accountability, especially under his predecessor Rex Ryan, whose brash talk fell far short of performance during his two-year stint.

And McDermott, along with general manager Brandon Beane, have established a firewall around the team in protecting it from internal roster meddling. That wasn’t the case under former president Russ Brandon, whose background was in marketing and not football, and led to the small-market team making decisions based as much on ticket sales as on-field results.

What’s also evident is how much McDermott’s stay-the-course approach after a win or loss echoes that of Reid, which was clearly the case this week with both teams coming off losses.

Said McDermott a day after losing to Tennessee: "(The Titans) were ready and like I said, I didn’t have my team ready. That chapter’s closed. We’ve got to learn from it and move on and continue to grow as a football team.”

Said Reid a day after a 40-32 loss to Las Vegas, which snapped the defending champions Chiefs' franchise-best 13-game winning streak: “We all could’ve done a better job starting with me, and I take full responsibility for it being the head football coach. There are things we can learn from this.”

“Andy was good at handling situations and presenting those situations to the players where they really understood with great clarity the direction we wanted to go as a team,” Frazier said. “Sean does the same job of painting that picture.”

Reid was 41 when he took over the Eagles in 1999, the same year McDermott joined the team as a scouting director following a one-year stint as a graduate coach at his alma mater, William & Mary.

Two years later, McDermott landed his first coaching job as assistant to the head coach, before working his way up to replacing defensive co-ordinator Jim Johnson in 2009.

“Probably not going to go into it, but I’ll tell you he’s a great coach and always has been,” Reid said of having to part ways with McDermott. “It was just one of those things. It’s worked out for him, that’s most important. He’s going to have a long career as a head coach.”

McDermott often references Reid and experiences he gained with the Eagles.

“I learned so much from him. To this day, to say that a guy is my mentor, my professional mentor, is just incredible,” he said.

Getting fired actually brought the two closer together, which is a lesson McDermott now relates to members of his staff.

“I would hope that I would have the same effect on coaches that are around me,” said McDermott, one of five former Reid assistants currently holding NFL head coaching jobs. “Later on in their career, maybe when I’m done, they can turn around and say, 'You know what, I learned a thing or two from Sean.’”