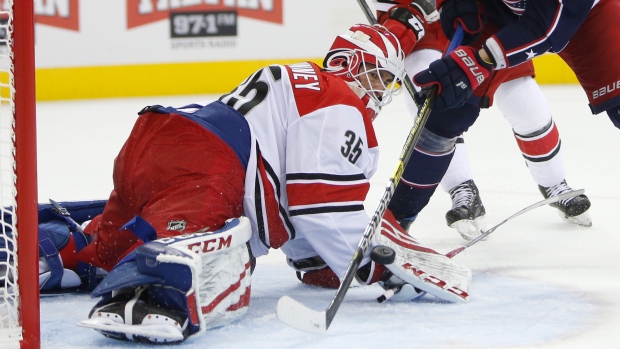 COLUMBUS, Ohio — Sebastian Aho and Micheal Ferland each had a goal and an assist and Curtis McElhinney — picked up off waivers three days ago — had 31 saves in the Carolina Hurricanes' 3-1 victory over the Columbus Blue Jackets on Friday night.

The 35-year-old McElhinney was signed Tuesday as a backup after starting goalie Scott Darling was injured last weekend. A former Columbus backup, McElhinney got the start Friday after Petr Mrazek played the first leg of a back-to-back the previous night.

The Sharks took a 2-0 first-period lead on goals by Timo Meier and Evander King before Los Angeles rallied to force the overtime.

Martin Jones made 19 saves as San Jose got its first win of the season after losing to Anaheim 5-2 on Wednesday.

Anze Kopitar and Tyler Toffoli scored, and Jonathan Quick made 30 saves for Los Angeles, which dropped an opener for the first time since 2015.