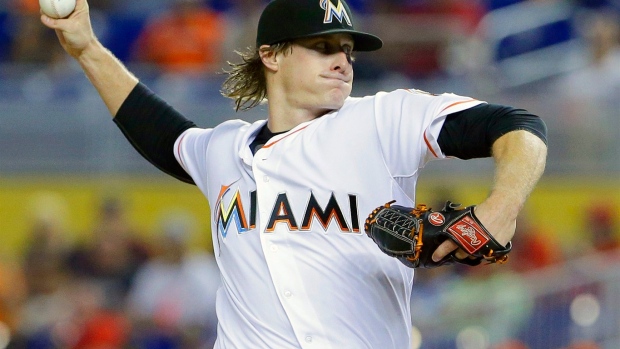 MIAMI - With his wife about to give birth, Tom Koehler hurried through the Philadelphia Phillies' lineup.

Koehler retired 15 in a row during one stretch and pitched six innings Wednesday, helping the Miami Marlins beat the fading Phils 5-0.

"He was warming up and pitching like she was going to give birth any second," said Marlins catcher Jarrod Saltalamacchia, who hit a two-run homer in the ninth.

Koehler (6-6) left the ballpark immediately after the game. The Marlins placed him on paternity leave and said his wife, Ashley, was expected to deliver their first child — a daughter — by Thursday morning.

"Big news," manager Mike Redmond said. "We're excited about that, and glad he got a big win on a big day for him and his wife."

Casey McGehee reached base three times, doubled home a run and scored another to help hand the Phillies their sixth consecutive loss. The Marlins, who lead the majors in home victories, clinched the three-game series and improved to 27-21 at Marlins Park.

Cole Hamels (2-5) gave up three runs and needed 97 pitches to get through five innings, ending his career-best 10-game streak of pitching at least seven innings.

"I wasn't getting ahead of guys," Hamels said. "Then, when I had to throw a strike, I left it up in the zone in a place where they were able to make solid contact."

Hamels, a victim of poor run support all season, remained winless since June 6. The Phillies were shut out for the 11th time, which is tied for second-most in the majors.

"It's hard to believe," manager Ryne Sandberg said. "Maybe it's a pressing situation. We need somebody to get it going — everybody to feed off of somebody coming through."

The Phils matched their longest losing streak of the year and fell 12 games below .500 for the first time.

Philadelphia reliever Mario Hollands took a sharp grounder off the left knee for a single in the ninth, gave up Saltalamacchia's homer and a double and then left the game accompanied by a trainer. Afterward, he said he was fine.

Ben Revere and Jimmy Rollins started the game with singles, but Koehler didn't allow another baserunner until the sixth. The Phillies' first two batters also reached in that inning, but again they failed to score. They went 0 for 6 with runners in scoring position.

The Marlins took a 1-0 lead in the fourth on a bases-loaded single by Donovan Solano. They added two runs in the fifth on RBI doubles by Ed Lucas and McGehee.

McGehee increased his hits total to 100, hiked his average to .312 and reached base for the 26th game in a row. He has revived his career after spending 2013 in Japan, but he said he's not about to rest on his accomplishments since joining the Marlins.

"It's half a season," he said. "I've seen how quick things can change. I've got to keep going every day. If you start patting yourself on the back, this game has a nasty way of reminding you you're not bigger than the game. It'll hunt you down."