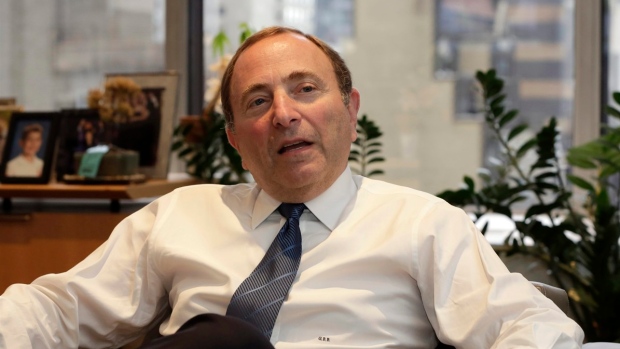 It was at the elegant, old money Breakers resort in Palm Beach, Fla. My memory is a little fuzzy now, but I seem to recall there was only a handful of media there, not a large gathering by any means.

We were standing in an opulent meeting room, awaiting the daily briefing from then NHL president Gil Stein when league employees Gary Meagher and Dave Keon Jr. came into the room carrying a big, green garbage bag.

There was just a small table set up at the front with four chairs behind it. I'll always remember Meagher and Keon rather unceremoniously dumping the contents of the bag onto the table. A bunch of empty VHS video cassette boxes spilled out with a clatter as well as two big plush dolls - Mickey and Minnie Mouse.

Keon went about setting up a little pyramid of videocassette boxes and Meagher was, with some difficulty, trying to arrange Mickey and Minnie so they were sitting upright on the table, holding Blockbuster videocassettes in their hands.

We asked Meagher and Keon, "What the %&# are you guys doing?"

Moments later, NHL president Stein strolled into the meeting room, sat down at the table with Los Angeles Kings' owner Bruce McNall and introduced Disney chairman Michael Eisner and Blockbuster Video magnate Wayne Huizenga and -- pretty much out of the blue, catching everyone by total surprise -- announced the NHL was officially expanding to Miami (Florida) and Anaheim.

To the shock of all, the Mighty Ducks of Anaheim and Florida Panthers became the 25th and 26th NHL franchises that day and began playing games 10 months later.

By the way, one day later, Dec. 12, 1992, the NHL introduced Gary Bettman as its first commissioner, though Bettman wouldn't officially take over the post until the following Feb. 1.

And so here we are, 22 years later. Bettman is still the commissioner, the NHL board of governors is meeting today and tomorrow, this time in Boca Raton, Fla., but no, there's not going to be a formal expansion vote or announcement. At least that is what Bettman tells us.

And if there were, unlike being gobsmacked in 1992, it should come as a surprise to absolutely no one.

From the moment the last NHL lockout ended, in January of 2013, expansion has been at the forefront of discussion and anticipation. Bettman hasn't done a single news conference of any consequence since then where he hasn't been asked about expansion.

The answer Bettman provided on opening day of this season is typical of what's he's been saying and has continued to say: "We're getting lots of expressions of interest. You and your colleagues seem more fascinated by it than I am or the governors are. We're going to continue to listen to expressions of interest, and that's gratifying that we're getting them, but we're not ready to go through a formal expansion project."

As recently as mid-November, Bettman said much the same thing: "All I'll do is continue to report on the levels of interest that are being expressed. There's no effort crying out for immediate expansion. But we are getting expressions of interest. Even if we decided tomorrow we're going to do it, it still wouldn't happen for two, three years."

Okay, Bettman's caution flag on expansion is duly noted, and I know from first-hand knowledge to be wary on this stuff because the expansion landscape can shift relatively quickly. A year ago right about now, I said it was my belief the NHL's expansion vision included adding three franchises in the coming years, with a preferred priority ranking of Seattle, Las Vegas and Quebec City, to the tune of well over $1 billion in total expansion fees.

Last December, Seattle looked like it was primed to take on an NHL team, but both arena and ownership issues arose in the months that followed, drastically altering that forecast. No one seems to have a sense now when, or if, Seattle will re-emerge but what seemed so hot a year ago has cooled considerably since then.

This fall, all the talk has been focused on Las Vegas as the new frontrunner.

After an interview with NHL deputy commissioner Bill Daly in early November, Minneapolis Star Tribune hockey writer Mike Russo reported Daly met with a potential ownership group in Las Vegas in early November and toured the construction site for the new arena being built by MGM Resorts. Larry Brooks reported in the New York Post a week after that the NHL had gone so far as to have chosen William Foley and the Maloof family as the designated owners of a Las Vegas expansion franchise when or if the NHL gets around to committing to expansion, and that the franchise fee would be $400 million.

Amid the Russo and Brooks reports, I speculated that the NHL's tentative master plan had gone from adding three teams (with a priority ranking of Seattle, Las Vegas and Quebec City) at the same time to perhaps doing a one off to Las Vegas, with a potential start date possible as early as the beginning of the 2016-17 season.

In the ensuing weeks, there has been a constant buzz on the NHL grapevine about expansion, suggestions that it is an absolute given the league will in the days, weeks or months ahead announce formal plans to go to Vegas and possibly Seattle and/or Quebec City, although it was also suggested Quebec City may be reserved as a potential relocation site, with a lesser transfer fee instead of an expansion fee.

Since then, the talk has only ramped up. As recently as last week, it was suggested to me the NHL will, at some point in the very near future, bestow a conditional expansion franchise to an ownership group in Las Vegas. That is, if certain requirements (including selling a designated number of season tickets) are met, an NHL franchise could be operational in Vegas as early as the fall of 2016.

None of these "suggestions" on the nature or timing of expansion could be ascertained as fact. At least not by me. They most certainly couldn't be reported as hard news. The NHL has continued to stick to the party line about listening to expressions of interest but otherwise remaining non-committal, only going so far as to say expansion may be discussed at today's or tomorrow's B of G meetings but that there won't be a vote or an announcement.

But we all know it's coming at some point in some form. If I were a betting man (see what I did there?), I might wager on Vegas as early as the fall of 2016 or 2017, but whenever and wherever it may be, unlike in 1992, no one should be caught off guard by anything this time around.

As a postscript to the Mickey-Minnie/Blockbuster green garbage bag expansion announcement of 1992, earlier that day in the Breakers, I saw a guy in the lobby wearing Hush Puppies with orange souls, dress pants, a bizarre, ugly green hockey jersey and a red ball cap with Goofy on it. He was sweating profusely, muttering to himself, pacing back and forth near the front desk.

If you've ever been to the Breakers, well, let's just say he didn't fit in with the crowd (neither did I, now that I think of it) and I was curious to see if security might ask him (or me) to leave.

As it turned out, it was Disney chairman Michael Eisner and he was wearing that exact same get up when he was introduced as the new owner of the Mighty Ducks later that day.

So if any of my media colleagues in Boca for the meetings happen to see Penn and Teller or a tiger or Celine Dion or a Cirque du Soleil troupe in the hotel lobby, just know the green garbage bag, and expansion, may not be far behind.