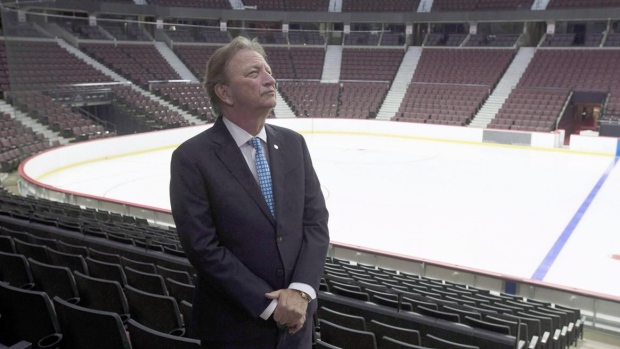 For years, Eugene Melnyk has made it abundantly clear he would never entertain the notion of his Ottawa Senators playing home games inside an arena he didn't own.

Yet lost in the noise of competing press releases and a $1-billion countersuit against Melnyk and his Capital Sports Management Inc. group on Tuesday was the understated admission from the Senators owner that he had officially changed his tune on that topic.

The Senators released a proposal to try to salvage the LeBreton Flats development project with their main partner, Trinity Developments, which has been off the rails for months.

Under the terms of the amended deal, Trinity would finance the construction of a state-of-the-art downtown arena in exchange for the Senators giving up their share of the profits for the surrounding retail, residential, commercial and recreational land in the development.

The original proposal had them as 50-50 partners, but this was a shift that would see the bulk of the financial responsibility fall on the shoulders of Trinity, rather than the Senators.

Under this scenario, Trinity would be forced to finance the entire project and the Senators would simply come in as the main tenant – although the hockey club says it would be on the hook for the operational costs of the arena during the term of the lease.

Most importantly, the Senators would be a tenant inside a building they didn’t own – a startling shift in philosophy.

The press release from the Senators outlining this proposal was akin to throwing a Hail Mary at the end of the regulation time in the hopes of a last-minute score. But that prayer was swatted away at the line of scrimmage less an hour later when Trinity Development issued a terse two-sentence statement that accused Melnyk of simply looking for a free arena.

That came several hours after Trinity filed a $1-billion countersuit in court on Tuesday, in which they accused Melnyk of “lacking the cash” to contribute to the project. In that document, Trinity suggested that Melnyk and the Senators had already tried to get the arena financed by their company back in October – a plan that Trinity rejected.

Trinity has been aware of Melnyk’s plan to play in an arena he didn’t own for months, but the public now has that information as well. Considering the Senators have been steadfast, at least publicly, about the desire to own their own downtown arena, this can’t simply be dismissed as a footnote to the larger story.

The Tuesday countersuit by Trinity Developments was in response to a $700-million lawsuit filed by Melnyk and Capital Sports Management Inc. last month in which the Senators claimed they were misled on the impact of an adjacent commercial property at 900 Albert St. – which is a stone’s throw from where the proposed LeBreton Flats development would be.

The Senators feel like the 900 Albert St. project, which is owned by Trinity Developments, would oversaturate the market for condos and retail in the area. In short, the Senators felt like there would be too much supply and not enough demand in the area and they wouldn’t be able to meet their profit targets.

Their public message to Trinity on Tuesday was simple: If you’re so confident that LeBreton Flats will be profitable – even with the 900 Albert St. condos in the mix – why not foot the bill for the entire project?

Trinity, of course, is saying that’s not what the original agreement entailed. This was supposed to be a 50-50 partnership with shared risk and reward.

Each party has sued the other and neither case has been proven in court, meaning we could have months of legal wrangling on our hands before an ultimate victor is declared. At this point, each side is digging their heels in deeper, confident they have a stronger case than their opponent.

So where does that leave us?

It’s abundantly clear that the Melnyk and Trinity Development groups can’t co-exist as partners moving forward. If there was any goodwill between the two parties they would be working diligently behind the scenes on a solution – not firing off competing press releases designed to win an ongoing public relations war.

The National Capital Commission, who is charge of the project and the land at LeBreton Flats, has given the parties a few more weeks to get their act together – or else they may be forced to go back to the drawing board.

The other candidate to redevelop the land – the DevCore Group, who was edged out in the first round of bidding – is still waiting in the wings with a proposal that also includes an NHL-calibre arena. Three years ago, Melnyk scoffed at the notion of playing inside an arena owned by DevCore as it all seemed like a ploy to squeeze him out of ownership of the Ottawa Senators.

But now that he’s publicly changed his stance on playing in someone else’s arena, the idea of being a tenant inside a DevCore arena has to be on the table. In the past, the DevCore Group was open to forming some sort of partnership with Melnyk at LeBreton Flats, so it would be a fair assumption that could still occur.

At last check, sources close to the situation said Melnyk is reiterating his intention to keep the team. That makes it highly unlikely that he would enter an agreement with DevCore that could put his ownership of the team in jeopardy.

Melnyk would undoubtedly demand full control of the hockey team and ensure he was not placed in a vulnerable position where DevCore could push him out the door if the lease agreement went awry.

Melnyk and the Senators could also theoretically enter an agreement with a third party, similar to what was done at TD Place/Lansdowne Park where the arena falls under the designation of a Municipal Capital Facility. In fact, that seemed to be the plan all along with Trinity – that the Senators wouldn’t have owned the building outright under this designation. That means the city takes a greater control of the project and its run as a not-for-profit venture, while the arena portion is privately funded.

In any event, once you cut through the legalese and PR jargon it’s clear that the Senators are willing to go on the record to state that they don’t need to own their downtown arena.

Melnyk, it should be noted, isn’t expected to speak to the media this week – even though he is hosting his annual holiday skate for underprivileged children at Canadian Tire Centre.

Interestingly enough, while hosting that same event in December of 2015, Melnyk shot down the idea of playing in an arena owned by somebody else.

“This skate would take months to get permission from someone that I don't know,” Melnyk said of trying to organize a holiday skate inside a building that wasn’t his. “Now, if I want to skate, I just go skate.”

Melnyk went on to talk about the importance of controlling every element of an NHL arena, from security to the concession stands.

Whatever scenario unfolds moving forward, it seems as though we’ve reached an interesting new plot twist in the LeBreton redevelopment.

Melnyk has publicly changed his tune on an issue he was adamant about for years.

And that shouldn’t be lost on anybody.