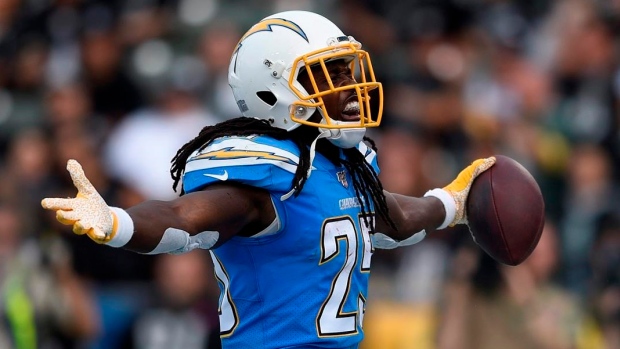 ENGLEWOOD, Colo. — Melvin Gordon's futile holdout last season holds many a lesson for the sixth-year running back, including the realization that the former Chargers star still has plenty of doubters despite scoring 49 touchdowns in college and 47 more in the NFL.

"I'm coming in hungry, ready to work, with a chip on my shoulder," Gordon said in a video from Florida posted on the Denver Broncos' Twitter feed.

Asked Friday during a conference call about that motivation, Gordon, who signed a two-year, $16 million free agent contract with the Broncos, said, "It's huge. I just felt like a lot of people doubt my talent as a back. During the holdout a lot of people just saying, 'Oh, he's an average back.'"

Gordon's slow start upon his return last fall did nothing to rebut his detractors even though he finished strong and ended the 2019 season with 908 scrimmage yards and nine touchdowns in a dozen games.

His holdout paved the way for Austin Ekeler's breakout season, which in turn led to his former backup signing a four-year, $24.5 million extension with the Chargers earlier this month.

A few days later, Gordon signed a two-year, $16 million deal with Denver, where the former Heisman Trophy runner-up at Wisconsin feels he still has plenty to prove.

"This year people are like, 'Oh, he's not the back that he was,'" Gordon said. "No one takes into account that I didn't have my centre. I didn't have my left tackle. We had guys that were hurt and just in and out. I didn't have really my starting lineup. My best linemen, I didn't have. No one cares about that -- nor should they."

Some players get the benefit of the doubt, Gordon said.

That is what's driving Gordon as he begins the second chapter of his NFL career, one which could be delayed by the COVID-19 pandemic that has pushed back off-season training and ground daily life across the globe to a near halt.

"To me, I'm going to take that (criticism) and I'm going to use it as fuel because I know what type of player I am," Gordon said. "I want to show that and I am going to show that. I'm so excited. I'm better than just average."

In Denver, Gordon, a two-time Pro Bowler, teams up with Phillip Lindsay, a two-time 1,000-yard rusher and a Pro Bowler in his first two seasons, in a suddenly dynamic Broncos backfield.

"You only hear great things about Denver. Obviously, I played there every year I've been in the league. I know how great the fan base is. I like their scheme. I watched film on them. I checked the offensive linemen. I like the way they get to the second level on their double teams. I just thought it was a great move and a great place to start off fresh and help boost my career," Gordon said.

"As far as with Lindsay, he's a great back. I watched him up close in person. These last few days I've been watching film on him as well just kind of seeing how they open things up for him and analyzing him a little bit. I think we can be a great 1-2 punch. Me and Austin were kind of that 1-2 punch. I feel like we were one of the better tandems in the league. I just hope to continue that with Lindsay."

Staying in the AFC West is a bonus for Gordon.