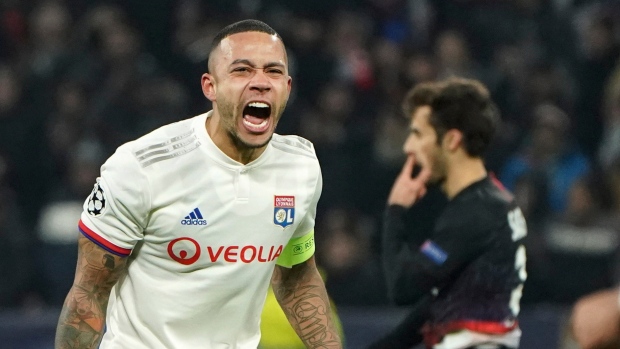 LYON, France — Lyon's qualification for the Champions League round of 16 was overshadowed by chaotic scenes at the end as star forward Memphis Depay clashed with a fan and tried to rip a banner out of his hand.

Depay scored a late goal to secure a 2-2 draw against Leipzig on Tuesday and sent Lyon through, but was then incensed by a fan who entered the field brandishing a banner urging defender Marcelo to “Get Lost." It is part of a ongoing and increasingly tense dispute between the Brazilian defender and sections of the Lyon support who no longer want him at the club.

Depay sprinted half the length of the field and tried to yank the banner from the fan, who moved to the side and then backed off into the stands. But more Lyon players joined in to back up Depay and, although there were no physical altercations, Marcelo was shown on television aiming a middle-finger gesture with both hands raised.

Depay, the club captain, was barely able to contain his anger when speaking to French broadcaster RMC Sport after the game.

“Look in my eyes. I'm upset, angry. I don't know what to say,” the Netherlands forward said. “You know how hard it is for the team when we know that somebody on our team has troubles with the supporters? What do you expect from us?”

“You go to the supporters and thank them and they say crazy, crazy things about somebody's family, somebody's kids,” Depay added. “I have no words. It doesn't make sense.”

He urged people “higher up in the club” to take appropriate decisions.

“It's very, very difficult to keep myself calm,” Depay said. “You can see on the camera, they (some of the fans) spit on us. What can I say? I've never seen something like this.”

“He's a real captain and he's acted and spoken like a captain," Garcia said. “It shows the strength and unity of this team.”

On the field, Depay had underlined his growing value to Lyon with his 82nd-minute equalizer to maintain his record of scoring in every group game he's played so far.

He latched on to a loose ball in the penalty area and struck an angled shot into the bottom left corner. Referee Anthony Taylor gave the goal after a video review ruled out a foul by Depay on a defender as they challenged for the ball.

Lyon finished in second place with eight points, three behind Group G winner Leipzig — which had already qualified — and one ahead of Benfica in third place. Benfica goes into the Europa League after beating Zenit St. Petersburg 3-0.

It looked grim for Lyon at halftime with Leipzig leading 2-0 thanks to two penalties. The first was converted by Sweden midfielder Emil Forsberg and the second by Germany striker Timo Werner. Both were awarded following VAR checks.

But midfielder Houssem Aouar pulled a goal back for Lyon with a brilliant effort in the 50th, collecting the ball on the left of the penalty area and cutting outside his marker before curling the ball into the top right corner.

Depay, who joined Lyon after an unhappy spell with Manchester United, then netted one of the most crucial goals of his club career.

Lyon was missing both of its first-choice full backs through injury and struggled to deal with Leipzig’s early attacks. Goalkeeper Anthony Lopes has made blunders during the competition and gave away an early penalty for impeding forward Yussuf Poulsen.

Forsberg coolly sent Lopes the wrong way as he slotted the ball into the bottom left corner after nine minutes.

Werner blasted a penalty down the middle and over the outstretched hand of Lopes in the 33rd, after midfielder Lucas Tousart clumsily barged Christopher Nkunku over.

Moments later, Nkunku had a few objects thrown at him from the crowd as he was taking a corner but none hit him.

Nkunku, who used to play for Lyon's French rival Paris Saint-Germain, glanced at the fans but otherwise did not react. The game continued following a very brief consultation between Taylor and another match official.