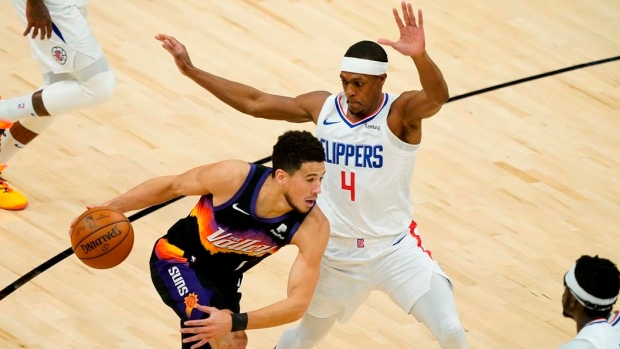 Rajon Rondo will likely sign with the Los Angeles Lakers, sources told ESPN's Adrian Wojnarowski, after the veteran guard was waived Saturday by the Memphis Grizzlies after a contract buyout.

Rondo will clear waivers Monday and will likely be signed to fill one of the final available roster spot with the Lakers, sources told ESPN.

The 35-year-old Rondo won a title with the Lakers during the 2019-20 season -- his second with the team -- before signing with the Atlanta Hawks prior to last season. He then was traded to the LA Clippers at the trade deadline for Lou Williams and two second-round picks.

The Clippers were hoping Rondo would give them leadership and playoff playmaking at point guard, but the veteran played in just 13 playoff games and fell out of coach Ty Lue's postseason rotation during the Clippers' run to the Western Conference finals.

The Clippers traded Rondo to the Grizzlies on Aug. 15 as part of a three-player package for guard Eric Bledsoe.

Rondo spent the first nine seasons of his NBA career with the Boston Celtics after entering the league in 2006. He has averaged 10.0 points, 8.1 assists and 4.6 rebounds over his 15 NBA seasons while also making stops in Dallas, Sacramento, Chicago and New Orleans.