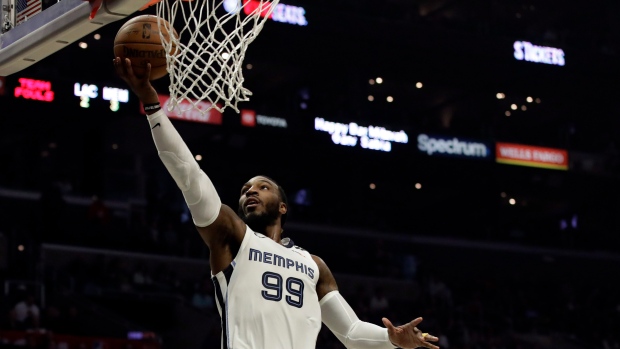 Jaren Jackson Jr. added 24 points, and Ja Morant and Dillon Brooks had 22 points each to help Memphis improve to 7-10 on the road with its highest scoring game of the season.

Montrezl Harrell led the Clippers with 28 points, and Kawhi Leonard and Lou Williams added 24 points each. The team appeared out of sorts from the start without George. He sat out with left hamstring tightness and Los Angeles clearly missed his defence.

The usually stoic Leonard complained to the referees, who hit him with a technical after the halftime buzzer. Coach Doc Rivers stayed on court discussing it and was unhappy about other calls in the game.

The Grizzlies raced to an 18-point lead to open the game, highlighted by a 16-2 run that included four 3-pointers. By the time Williams made the Clippers' first 3-pointer late in the second, cutting their deficit to seven, the Grizzlies had already connected on 10 3s. Los Angeles never got closer.

The Bucks improved to 32-5 with their fifth straight victory since a Christmas Day loss in Philadelphia. Eric Bledsoe added 21 points.

Khris Middleton scored 20 points for the Bucks and backup centre Robin Lopez had 14 points in 19 minutes.

DeMar DeRozan led the Spurs with 26 points and LaMarcus Aldridge added 16 — all the first half.

NEW YORK (AP) — Fred VanVleet had 29 points and 11 assists, Kyle Lowry scored 26 points and Toronto bounced back from its worst offensive performance of the season to beat slumping Brooklyn.

Spencer Dinwiddie scored 23 points for the Nets. They have lost five straight games.

The Celtics hung on for their eighth win in nine games after a 16-point lead dwindled to three in the fourth quarter. Tatum hit a 3-pointer with just over a minute left to bump the lead to seven, and the Atlantic Division leaders came out on top after rallying from 18 down to beat Atlanta on Friday night.

DALLAS (AP) — Terry Rozier scored 29 points, including the go-ahead 3-pointer in overtime after his tying basket in regulation, and Charlotte outlasted Dallas.

Devonte Graham had 27 points and 13 assists to help the Hornets win their second straight after a season-worst six-game losing streak.

Jamal Murray scored all 39 of his points after the first quarter for Denver. The Nuggets have lost two of three on their five-game trip.

ATLANTA (AP) — Trae Young scored 30 of his 41 points in the first half, Kevin Huerter added a season-high 26 points and Atlanta beat Indiana after blowing a 22-point lead.

Lonzo Ball had 24 points with 10 assists and Redick scored 18 as the Pelicans won for the fifth time in six games.

Nemanja Bjelica converted a four-point play for Sacramento with 4.2 seconds left to tie it at 115. Harrison Barnes scored 30 points to lead the Kings, and Buddy Hield added 24.