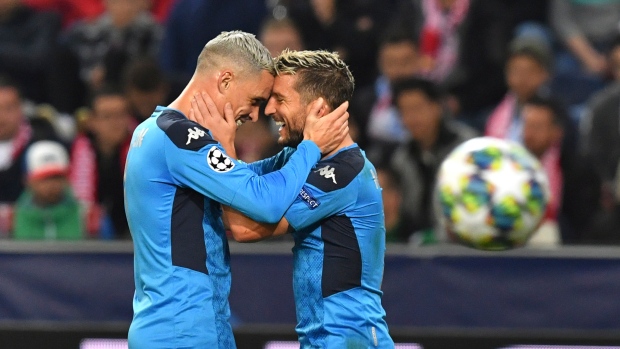 SALZBURG, Austria — Dries Mertens scored a brace to move ahead of Diego Maradona on Napoli's all-time scoring list in a 3-2 victory over Salzburg in the Champions League on Tuesday.

Salzburg's 19-year-old forward Erling Haaland also scored twice, giving him six goals in three matches to make him only the second teenager in Champions League history to score in each of his first three appearances in the competition, after Karim Benzema achieved the feat with Lyon.

Salzburg is next with three points while Genk trails with one.

Haaland, who has 20 goals in all competitions this season, also had a score disallowed early on by VAR for offside.

Mertens then ran onto a headed pass from Jose Callejon and completed a counterattack by scoring from a sharp angle.

Napoli goalkeeper Alex Meret produced a series of stunning saves before Salzburg Kevin Malcuit was whistled for taking down Hwang Hee-chan to set up a penalty for Haaland — the first goal Napoli conceded in this season's competition.

Mertens' second came from the centre of the area after a deflected cross came his way. The Belgium international now needs only six more goals to break Marek Hamsik's club record of 121.

Maradona scored 115 goals for Napoli in all competitions, and led the club to two Serie A titles and the 1989 UEFA Cup trophy — three decades later still the team's only major championships.

Insigne then was set up by Mertens for a deflected shot that looped in.

After scoring, Insigne immediately ran over and embraced Napoli coach Carlo Ancelotti amid reports of a rift between the pair since Insigne was left in the tribune for a 0-0 draw with Genk.