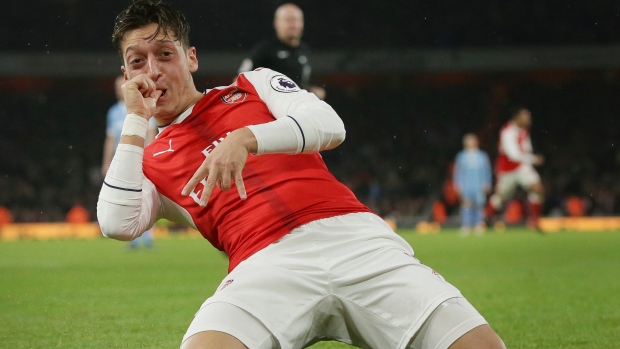 LONDON — Time appears to be running down on Mesut Ozil’s 7 1/2-year career at Arsenal.

The former Germany international was active on social media on Saturday amid widespread reports he was close to sealing a move to Turkish club Fenerbahce.

Ozil shared a video on Instagram of himself standing outside Arsenal’s home ground, Emirates Stadium, on a wet day in London. He was under a picture of former Arsenal teammate Sead Kolasinac, who has also left to join Schalke in Germany.

“You’re at Schalke and now I see you here again," Ozil said, adding: "We’ll see each other in the summer.”

Suggestions that was a farewell trip to the stadium were strengthened by Ozil later responding to a tweet by Fenerbahce with a post that contained the Turkish club’s colours — yellow and blue — and an egg timer.

Arsenal and Ozil are in talks about releasing him from his contract. The British Press Association news agency is among sections of the British media reporting that both parties have all but agreed to tear up the final months of a deal that is set to expire in the off-season.

Ozil hasn’t played for Arsenal this season after falling out of favour with manager Mikel Arteta over concerns about the player’s work rate. The 32-year-old Ozil wasn’t even included in Arsenal’s Premier League squad for the season and has been tweeting ostentatiously his support for the team from his home during matches.

If Ozil — who is of Turkish descent — moves to Fenerbahce, he would be joining one of the favoured clubs of Turkey President Recep Tayyip Erdogan.

Ozil posed for photos with Erdogan in May 2018 in the run-up to the Turkish general election — prompting serious criticism from German soccer officials and antagonizing some in Germany who felt the player wasn’t fully behind the national team preparing for the World Cup — while the president was an official witness at Ozil’s wedding ceremony.

Ozil’s last match for Arsenal was in March, a week before soccer was suspended at the outbreak of the coronavirus.