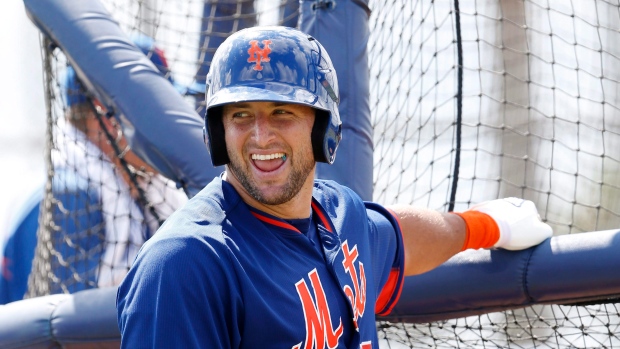 PORT ST. LUCIE, Fla. — Tim Tebow may have had his best day as a New York Mets prospect.

The 2007 Heisman Trophy winner and former NFL quarterback had two hits, scored a run and ended a three-inning game with a sliding grab Tuesday in his final tuneup before his instructional league debut. He is to play Wednesday against the St. Louis Cardinals' instructional club.

"I feel like every day I'm getting a little more comfortable," said Tebow, who singled in his last two at-bats of the simulated game. "It's great just to see live pitching and get live at-bats. I'm just getting a little bit better every day. That's the goal."

The first week of camp had more the feel of a circus. Tebow, the first sophomore to win the Heisman, was on display with new teammates, new surroundings and playing a sport he had not competed in since high school.

In the second, he looped a single to shallow centre, the ball barely eluding diving shortstop Hansel Moreno, delighting the couple of hundred fans on hand. While attempting to steal, Tebow scored when the ball was batted into play and Moreno committed a throwing error on a force play at second.

Tebow followed in the third inning with a sharp single through the left side on a 93 mph fastball from Cameron Planck.

"I just tried to take it where it was pitched," he said.

Tebow played left field, and in the second inning charged hard on Moreno's fly but failed to get close enough as the ball landed foul.

"I honestly try to (go after) everything pretty hard and try to stay intense. Hopefully, that's something I can bring to this game and these young kids," he said. "Everything you do, just do it with an intense amount of focus and effort."

On the game's final out, a drive in the gap, he backhanded the ball for his second putout of the day.

"You try to get on your horse and go run it down and do what you can do to make the catch," he said.

As for his professional debut, Tebow wants to keep things simple.

"You prepare for it the same way you prepared for today," he said. "You don't want to change anything. You don't want a game day to be any bigger than any other day. Consistency is the key. Just make the next day a little bit better."

Wednesday will be different — a full game against pitchers he hasn't seen.

"It will be fun to suit and get to play a different team and compete," Tebow said. "But I think we've been competing every day. It's one more day and one more opportunity."