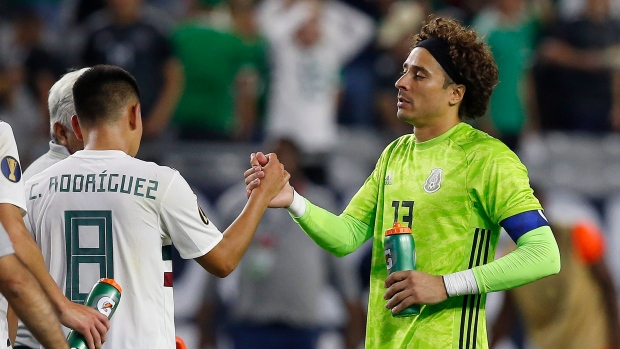 El Tri played a complete game except for one area: Finishing.

Unable to score on multiple golden opportunities, Mexico needed Raul Jimenez's goal on a penalty kick in the 93rd minute to end Haiti's impressive Gold Cup run in the semifinals with a 1-0 victory on Tuesday night.

"We are very happy with the players' effort," Mexico assistant coach Jorge Theiler said through a translator. "Mexico is going to the finals and that's what matters."

Mexico dominated possession, yet could not find a way to put the finishing touches in Haiti's end, allowing Les Grenadiers to hang around and build confidence while playing to a scoreless tie in regulation.

Jimenez was awarded a penalty kick early in the extra time after Herve Bazile took him down at the edge of the penalty box. Jimenez slow-played the penalty kick, slipping it behind Jhony Placide after the Haitian goalie dove to his right to bring the crowd to its feet.

"We just kept doing what we were doing and we showed a lot of character," Mexico defender Carlos Salcedo said. "There have been games where we could do a lot of what we wanted and others where we couldn't. That's how these tournaments go. We did what we had to do."

Haiti had several good chances on counters after absorbing Mexico's pressure, yet couldn't get a ball into the net in its first Gold Cup semifinals.

Les Grenadiers had a final chance to tie in the 119th minute, but Mikeal Gabriel Cantave's shot hit the crossbar and popped straight up in the air to Mexico goalie Guillermo Ochoa.

"We knew Mexico would probably dominate the possession," Haiti coach Marc Collat said through a translator. "We wanted to keep it tied as long as we could and take advantage of our opportunities, but unfortunately we could not take advantage."

Mexico, a seven-time Gold Cup champion, arrived in the desert as an overwhelming favourite against the young, confident Haitian side.

Ranked No. 101 in the world, Haiti did not bow under the pressure of playing in its first Gold Cup semifinal or facing mighty Mexico in front of 64,000 fans who made it feel like a home match for El Tri.

Haiti beat Canada in the semifinals for its biggest win since qualifying for the 1974 World Cup and did not back down from Mexico, withstanding El Tri's constant pressure and counterattacking when the opportunity arose.

With manager Gerardo Martino watching from a suite above — he was suspended after picking up two yellow cards — Mexico struggled to finish in the first half despite numerous chances. Placide also made a diving save on Jimenez's header late in the half to keep Les Grenadiers tied at halftime.

Placide made another spectacular save in the 67th minute, leaping to knock away Andres Guardado's free kick from just outside the penalty box, and Mexico continued to watch quality scoring opportunities come up empty.

"It's what we do, we fight," Haiti defender Andrew Jean Baptiste said.

Haiti failed in three previous attempts to get past the Gold Cup quarterfinals, including a loss to Mexico in 2009.

Les Grenadiers, with their mix-and-match of young players born in countries across the globe, overcame language barriers — they speak everything from Creole to Portuguese — to make a monumental breakthrough to inspire a country that still hasn't fully recovered from a massive earthquake in 2011.

Haiti won its group with a surprising comeback win over Costa Rica and rallied from a two-goal halftime deficit to beat Canada 3-2 to reach its first Gold Cup semifinals.

Haiti's confidence carried into its game against El Tri.

Mexico, which beat Costa Rica on penalty kicks in the quarterfinals, used its crisp-passing control game to pressure Haiti throughout the first half. But Les Grenadiers played a countering, direct-attack game to create a few chances of their own.

Les Grenadiers fought to a scoreless tie in regulation, but their dream run ended with a penalty kick and a hit crossbar in extra time.

"We left it all on the field," Baptiste said. "Guys could barely walk off the field."