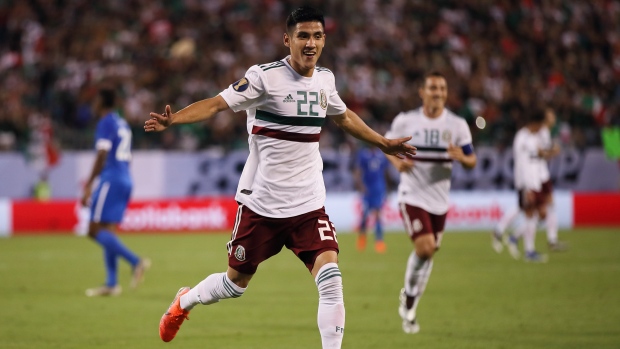 CHARLOTTE, N.C. — Mexico coach Gerardo Martino wasn't particularly pleased with his team's play Sunday night, even after it went unbeaten in CONCACAF Gold Cup group play to advance to the quarterfinals with a 3-2 win over Martinique.

His team only converted three of 24 shots on goal and nearly squandered a two-goal lead in the closing minutes.

"I'm not happy," Martino said. "When we are being pressured like (at the end of the game) we always try to take the initiative and continue playing. We had too many distractions, especially defensively, and further on in the competition that could cost us the match."

Mexico was never in danger of not making the quarterfinals after winning its first two matches by a combined score of 10-1. So it rested a handful of players, including goaltender Guillermo Ochoa and midfielder Erick Gutierrez, who injured his hamstring in a 3-1 win over Canada in a previous group play game.

On Sunday, Mexico did just enough to win.

Uriel Antuna, Raul Jimenez and Fernando Navarro scored as Mexico prevailed in front of 59,283 fans at Bank of America Stadium, the large majority of which were clad in country's green, red and white colours.

After several missed opportunities early, Antuna got Mexico on the board in the 29th minute with a nifty left-footed shot between the legs of a Martinique defender that rolled just inside the right post.

A last-minute addition to the roster, the Mexican forward is having quite the Gold Cup tournament. Antuna scored three goals and added an assist in a 7-0 rout over Cuba in Mexico's opening game June 16 at the Rose Bowl.

Despite outshooting Martinique 13-5 and controlling the ball for 68 per cent of the first half, Mexico only lead 1-0 at the break.

Martinique took advantage of the missed chances, tying it at 1 in the 56th minute on a free kick by Kevin Parsemain.

But Mexico would never trail.

Jimenez answered in the 61st minute scoring on a cross from Rodolfo Pizarro to make it 2-1. Fernando Navarro then gave Mexico an insurance goal it would later need by scoring 11 minutes later.

Martinique gave Mexico a scare when it cut the lead to 3-2 in the 84th minute when Delem pushed a shot past backup goaltender Jonathan Orozco. And it had a few other chances to tie the match, but couldn't convert.

"We had a good game, I don't think anyone here would say we did not," said Martinique coach Mario Bocaly. "It was a continuation of the work we have been doing for the last 18 months. We have started playing as a team."

That left Bocaly lamenting an earlier group play loss to Canada, one that prevented his team from reaching the quarterfinals.

"There are regrets coming to mind. It was the first game and we were not good physically or tactically in that game," Bocaly said.

Canada joined Mexico in advancing out of Group A into the quarterfinals next Saturday night in Houston, Texas. Mexico will play the runner-up of Group B, while Canada will play the winner of Group B. Their opponents have not yet been determined.