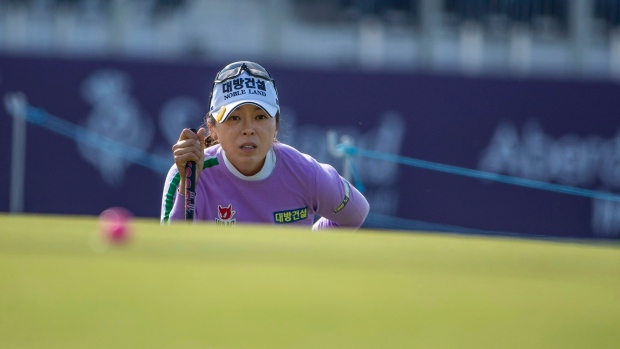 NORTH BERWICK, Scotland — Mi Jung Hur surged into a two-shot lead Friday in the rain-delayed second round of the Ladies Scottish Open, getting the best of the draw and finishing in the early evening with a 9-under 62.

Players with morning tee times dealt with heavy wind and rain at The Renaissance Club, and play was suspended in the early afternoon, delaying the start times for half of the field and giving them a huge advantage as the sun came out and the wind died. The second round could not be completed Friday because of darkness.

Hur, who started on No. 10, made only one par over her first 12 holes. The South Korean began with two birdies and then holed a 25-yard pitch-and-run from the rough for eagle on the par-5 12th. She made six more birdies, along with two bogeys, over her next nine, and added one more birdie to post a two-day total of 14-under 128.

"I got a really lucky draw for this week. I had the morning yesterday and afternoon today," Hur said. "I know it was really tough this morning, but sometimes I need luck for those things."

None of the players who started in the morning was inside the top 20.

Moriya Jutanugarn was 12 under after a 66. Sharing third at 10 under were U.S. Women's Open champion Jeongeun Lee6 (65) and Anne van Dam, who followed her opening-round 63 with a 69.

"I think if we get decent weather, low scores are out there," van Dam said. "If it will get rainy and more windy, maybe two rounds around par will be fine. So I have no clue."

Muni He was 9 under with three holes to play, the best score among those who did not finish.

Former U.S. Women's Open champion Na Yeon Choi, who has struggled with back injuries for the past four years, was 6 under after a 64. She tied for third in her previous tournament, the Dow Great Lakes Bay Invitational, her best finish since 2016.

Laura Davies matched the best round of the morning wave with a 68. The 55-year-old Hall of Famer aced the 152-yard fifth hole, her 12th career hole-in-one.

"Lovely wedge, never left the pin," Davies said. "It seemed to roll for ages and just dropped in."

Only two of the 78 players with morning tee times broke 70.

"It's probably the second-best round I've probably ever shot because obviously needed to have a good round to make the cut," said Davies, who opened with a 72 and was 2 under. "I had a 6-under 66 in Canada years ago in similar conditions, but that's as close as I can get to it. It was horrific out there. ... I hit two 1-irons into the fourth, 1-iron off the tee and 1-iron into the green. I've never done that before."

It was Davies' first made cut in 11 LPGA Tour starts this year. She has been working part-time as a TV commentator and joined the Sky Sports broadcast booth after her round on Friday.

"People say, 'Oh, should you give up and commentate, you're a rubbish golfer now,' but I still know I can hit shots and play like that," Davies said. "I've just got to do it and prove it, and that's the only thing. But you can only prove to yourself if you hit the good shots."