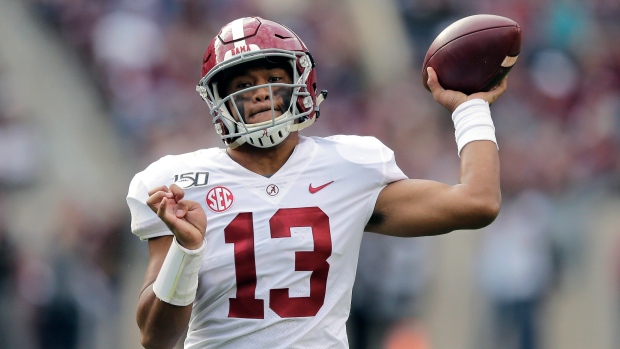 MIAMI — Rookie quarterback Tua Tagovailoa passed his physical when he reported to Miami Dolphins training camp and will practice without restrictions as he begins his bid to overtake veteran Ryan Fitzpatrick for the starting job.

The all-clear will allow Tagovailoa to practice for the first time since a career-threatening hip injury ended his Alabama career in mid-November.

"He’s through the physical, and when we do get to practice, you’ll see him out there,” coach Brian Flores said Wednesday.

That will be in mid-August, after a couple of weeks of strength and conditioning workouts and walkthroughs. The usual training camp regimen has been altered because of the coronavirus pandemic, which also forced the cancellation of off-season drills throughout the NFL.

As a result, the Dolphins have had little chance to groom Tagovailoa. The No. 5 pick in the April draft is hailed as a potential franchise quarterback, but Flores stressed the need for patience.

“I know there are a lot of people that want to talk about Tua, and I understand it,” Flores said. “But at the same time, he’s a young player and this is his first NFL training camp. I think he’s got to take it one day at a time and not think about what’s realistic for the season.”

Tagovailoa spent the off-season in Alabama rehabbing and participating in the Dolphins’ virtual meetings. He's the centerpiece in a rebuilding project under second-year coach Flores that becomes even more challenging as the Dolphins, 5-11 last year, try to navigate the pandemic.

No players or coaches have opted out for 2020, Flores said. But he's well aware the virus could quickly sink the season, and the dangers were underscored by the recent outbreak that forced the Miami Marlins to call off at least a week of games.

“One person can bring in the virus, and it can spread like wildfire,” Flores said. "So each one of us has a responsibility. If you enter the facility, you have a responsibility to the 150, 180 or 200 other people in the facility. We need to be smart and make good decisions. I think our guys understand that.

“Look, you can be smart and make all good decisions and it still might not work out, because that’s just kind of how this is. But I think we’d all have peace of mind knowing that we’ve done everything possible that we can do individually.”