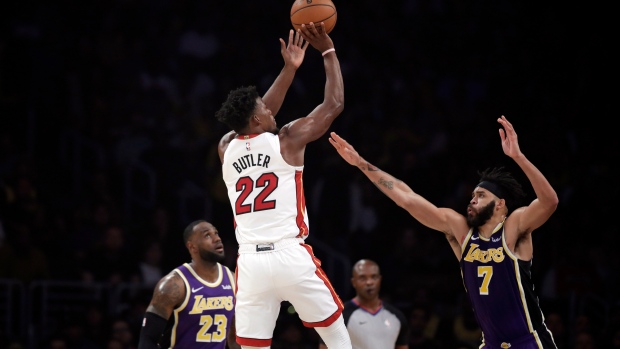 There’s no question the Los Angeles Lakers are the favourites heading into the NBA Finals, but so far, the Miami Heat have been drawing big money. So much so that lines have already moved according to ESPN’s David Purdum.

Purdum writes that the Lakers’ odds at the SuperBook at the Westgate in Las Vegas have shifted from -450 to -360. Purdum adds that 17 of the first 18 bets placed Monday morning were on the Heat, who have lost only three games in the playoffs on their way to the Finals.

At William Hill U.S. sportsbooks, Los Angeles is at -400 while the Heat sit at +320 in the series. Despite dropping two of their three series-openers these playoffs, LeBron James and Co. currently sit as five-point favourites over the Heat in Game 1.

Purdum notes that Miami has not been a very popular pick from bettors until recently as 10 teams attracted more bets than the Heat throughout the season at the SuperBook including the Golden State Warriors, who were without Steph Curry and Klay Thompson for most of the year and finished at 15-50 for the worst record in the NBA. Purdum writes that the Lakers have been attracting steady money since they acquired superstar Anthony Davis from the New Orleans Pelicans in a blockbuster trade last summer.

The NBA Finals are set to tip off Wednesday evening from Orlando at 9:00pm et.