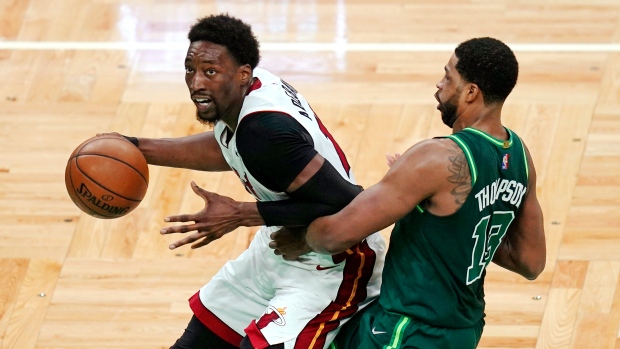 BOSTON (AP) — Tyler Herro scored 24 points and the Miami Heat clinched a playoff spot and locked the Boston Celtics into the play-in tournament Tuesday night with a 129-121 victory.

Miami moved into a tie with idle Atlanta for fifth place in the Eastern Conference. The surging Heat won for the 10th time in 13 games. They have three games left in the regular season.

Bam Adebayo and Duncan Robinson each scored 22 points, Kendrick Nunn had 18 and Goran Dragic 17 for the Heat. They swept the two-game series in Boston.

Miami star Jimmy Butler had 13 before missing the second half with an eye injury.

Kemba Walker led the Celtics in their regular-season home finale with 36 points. Jayson Tatum scored 33 and Evan Fournier 20. Boston has lost seven of 10.

The Celtics, who already clinched a spot in the 7-10 play-in tournament, trail Miami and Atlanta by three games, but lost the tiebreaker against both teams. Boston has three games left.

It was the first game for the Celtics since they announced Monday that All-Star forward Jaylen Brown would miss the remainder of the season to undergo surgery on his left wrist for a torn tendon.

Coming off a 130-124 win over the Celtics on Sunday, the Heat showed the scoring balance — even without Butler — that carried them to the Eastern Conference title over Boston last season.

Both teams tightened up defensively in the third quarter, and it became more physical, with Boston’s Marcus Smart briefly having words with Robinson after the pair went to the floor hard when Smart was called for a foul.

Robinson scored eight of his 13 third-quarter points during a 17-4 spree that pushed Miami’s lead to 93-77. The Heat led by 14 entering the final quarter.

Dragic's 3 gave the Heat a 105-84 edge with 9:02 to play, bringing some boos cascading down from the crowd filled to 25% percent capacity.

Celtics: Coach Brad Stevens said Brown had already left Boston and will have the procedure later this week. “You feel for Jaylen, he had a great year,” Stevens said. “He’s such an important part of us as we move forward.” … C Robert Williams III missed the game with left foot turf toe. … Stevens was whistled for a technical in the second quarter.

Walker left in the game’s opening two minutes with an apparent left shoulder injury after colliding with Adebayo after grabbing a rebound.

Walker immediately dropped the ball, in play near the baseline in front of Miami’s bench as he walked off, heading down a runway toward the locker room with 10:13 left.

Tatum ran back to get the ball as Stevens screamed for guard Carsen Edwards, who took Walker’s place after a Celtics’ timeout. Walker returned with 6:25 left in the quarter.

Heat: Host the 76ers on Thursday night. Miami lost both previous meetings, in Philadelphia, coming on consecutive days in January.

Celtics: At Cleveland on Wednesday night.