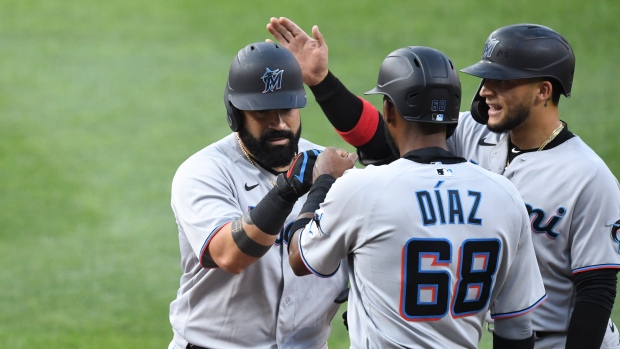 BALTIMORE (AP) — Sandy Alcantara took the mound under difficult circumstances — the Miami right-hander's mother died, and this was his first start since coming off the bereavement list.

“I hope she was watching the game too," he said.

Alcantara pitched into the seventh inning, and Sandy León hit a three-run homer in the second to help the Marlins to a 7-3 victory over the Baltimore Orioles on Tuesday night.

Lewin Díaz and Brian Anderson added solo shots for Miami, which has won three straight. León singled and scored in the fourth.

Alcantara (6-9) allowed three runs and six hits in six-plus innings in his first start since July 16.

“Just tried to be focused, pitch by pitch, and I did today," Alcantara said.

Alcantara held Baltimore without a hit until Austin Hays led off the bottom of the fourth with a home run. Cedric Mullins also homered for the Orioles, who were coming off a three-game series sweep over Washington to match their longest winning streak this season.

Spenser Watkins (2-1) allowed four runs and nine hits in four innings. He hadn't allowed more than a run in any of his first three big league starts.

León ended that streak with a two-out drive to right field in the second. Two innings later, he came home on Starling Marte’s single to make it 4-0.

“The biggest separation I think was the feel for the offspeed,” Watkins said. “Trying to find that consistent feel was a little bit more of a search for me tonight, rather than having it from pitch one.”

Díaz's home run put the Marlins up 5-1. He was recalled from Triple-A Jacksonville before the game, and right-hander Luis Madero was designated for assignment.

It was Díaz's third home run of the season.

“If he’s getting the at-bats, it’s worth it him being here. If he’s not, then it’s better to keep playing," manager Don Mattingly said. “He’s looking better each time you see him.”

Mullins hit a solo shot in the sixth, but Anderson answered with his home run in the seventh. Ramón Urias chased Alcantara with a run-scoring single in the seventh, and Jesús Aguilar hit an RBI single the following inning for Miami.

The Orioles put men on second and third with one out in the eighth but didn't score. Ryan Mountcastle hit a foul fly to right, and DJ Stewart grounded out to second.

Right-hander Conner Greene made his major league debut for the Orioles, pitching the final two innings. He allowed a run and two hits and struck out two.

“He was really amped up that first inning. You saw a bunch of 98, 99s. I hadn't seen that before," manager Brandon Hyde said. "Connor's got good stuff. We know that. We saw that in spring training. Saw three pitches, saw a good fastball, a slider and a changeup. ... I like the energy he brings on the mound. He's definitely in the fight every single pitch."

Jorge López (2-12) takes the mound for the Orioles on Wednesday night in the finale of this two-game series. Jordan Holloway (2-3) starts for the Marlins.

López leads the majors in losses.