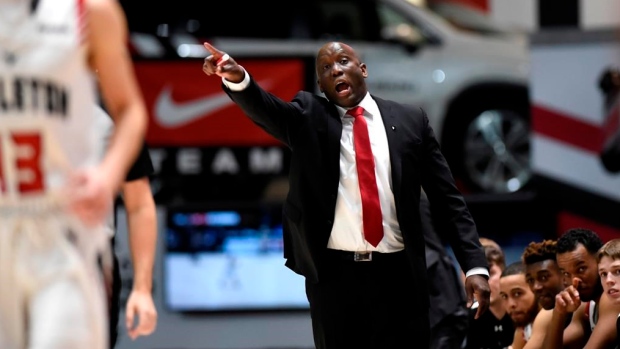 The Carleton University men’s basketball team is on a mission to, once again, prove itself as the best hoops program in the country — regardless of the road it must take.

“We’re about winning national championships,” said Ravens head coach Taffe Charles. “We’re here, and from whatever position we are, we still need to win three games.”

After a year without U Sports men’s basketball championship because of COVID-19, Carleton is back in the Final 8 looking to defend its titles from 2019 and 2020, but the path the Ravens will need to travel this time around will be much different than their two previous victory marches.

Unlike in the two championship years past, the Ravens are not entering the Final 8 as the No. 1 seed. Instead, they were given a wild-card berth and are coming in as No. 7, where they will have to face Canada West champion No. 2 seed Victoria in their first-round matchup on Friday.

Not that Charles and Carleton are particularly sweating it much.

“We’re gonna play whoever we’re gonna need to play,” Charles said. “I think, though, if you were to ask Victoria and their coach, I think he’d probably say that was something that wasn’t fair for them.”

Led by star duo Lloyd Pandi and Alain Louis, the Ravens enjoyed a perfect 14-0 OUA regular season, but during the playoffs they were stunned by Queen’s in the East Division final, 86-80.

Charles doesn’t believe his team played well in the loss and is looking forward to correcting things during the national tournament.

“We’re looking forward to be able to, avenge, or play better,” Charles said. “I think if we play the way we need to play, I think we’ll be all right.”

With its win over Carleton, Queen’s moved onto the OUA championship game against the Brock Badgers, who crushed the Gaels 95-75 behind 27 points from Brock leading scorer Tajinder Lall.

The Badgers had a great regular season, going 14-1, on their way to winning the OUA championship and securing a No. 1 seed in the Final 8.

This is just the second time in the program’s history it's entering as the No. 1 seed. The last time this happened, in 1992, Brock won its first men’s basketball title. The Badgers also won a championship in 2008, and will be hoping to collect a third banner by the weekend’s end.

"We have a workman’s-like attitude and that’s just all we try to focus on," said Brock basketball head coach Willy Manigat. "Everything outside of that is just noise and we’re just happy to continue to get the opportunity to work together.”

On the opposite side of the bracket of Carleton, the Badgers and Ravens never met in OUA play this season, but could have an opportunity to do so in the championship game on Sunday, if both sides make it that far.

A Badgers-Ravens final would make for an interesting one as the two head coaches, Manigat and Charles, are both former Carleton players and relatively new in their jobs.

Both men are in what is technically their second season at the helm of their respective men’s programs due to the fact there was no basketball played in 2020-21. They each saw different degrees of success in their coaching debut seasons in 2019-20, with Manigat leading Brock to an OUA playoff appearance and Charles going on to help Carleton win the national championship.

Charles, though, has more head coaching experience than Manigat, as he was at the helm of the Carleton women’s basketball program for 12 years prior to being named legendary Ravens coach Dave Smart’s successor with the men’s team. Manigat, however, was Smart’s lead assistant with Carleton and won a pair of national titles in 2017 and 2019 with them before he moved on and accepted the Brock head coaching job.

The U Sports Men’s Final 8 will begin Friday and run all the way through Sunday at the Saville Community Sports Centre in Edmonton.

Like the NCAA basketball tournament, it is a single-game, single-elimination tournament.

“There’s some good teams and everybody believes they have a chance to win and the sudden death of it is probably the one that makes it the most exciting," said Charles. "And to have the eight best teams in Canada represent that I think it’s a great event.”