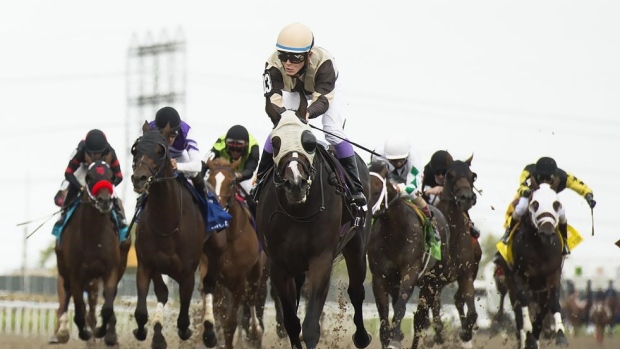 TORONTO — Mighty Heart is being pointed towards a run at the OLG Canadian Triple Crown.

Josie Carroll, Mighty Heart's trainer, said Tuesday the one-eyed colt has come out of last week's victory in the $400,000 Prince of Wales pretty well. And should that continue, Carroll sounded optimistic about Mighty Heart running in the $400,000 Breeders' Stakes on Oct, 24 at Woodbine Racetrack and attempting to become the first horse since '03 to complete the Triple Crown sweep.

"He's doing well," Carroll said in a telephone interview. "He was tired off the (Prince of Wales) but that's to be expected but he seems to have bounced back well. So far, so good.

"Barring any setbacks, we're going to go in that direction (Breeders' Stakes). That's where we're pointing."

Mighty Heart , with jockey Daisuke Fukumoto aboard, captured the $1-million Queen's Plate on Sept. 12, going wire-to-wire for the 7 1/2-length victory as a 13-1 longshot over 1 1/4-miles on Woodbine's Tapeta surface. Mighty Heart and Fukumoto made it two-for-two Sept. 29, winning the 1 3/16-mile Prince of Wales on Fort Erie Racetrack's dirt circuit, the 6/5 favourite rallying from third seemingly with ease to register the victory.

That leaves Mighty Heart one win short of becoming just the eighth horse to win Canada's Triple Crown and first since Wando in 2003 for trainer Mike Keogh and late owner Gus Schickedanz. And to be able to do so at a time when horse racing will be front-and-centre with a large segment of the Canadian sporting public will present the industry with a huge opportunity.

"I think it's a boost for racing," Jim Lawson, the CEO of Woodbine Entertainment, said last week. "It puts us in the limelight to promote and market it."

The Prince of Wales victory was Mighty Heart's third in four races. Overall, he has three victories and a third-place finish in six career starts, all coming this year, for $688,003 in earnings.

Heady stuff for a horse that lost an eye in a paddock accident with his mother as a foal.

"I think it certainly has lifted everybody at the barn up to have a horse that's this much fun," said Carroll, who was inducted into the Canadian Horse Racing Hall of Fame in 2019. "He has come a long way, particularly from last year when this horse was timid to even walk on the wash bay because it was something new.

"He has grown tremendously in confidence with every race. Maybe that's what I'm seeing about this horse, a tremendous change in his confidence."

But that's not to suggest Mighty Heart has been difficult to deal with.

"He's a pretty easy-going horse," Carroll said. "For a horse that's had his challenges, he's pretty uncomplicated to train now that he's figured things out.

"He's pretty keen to go out in the mornings. I think you'll find most race horses are keen to get out of their stalls and go do something."

Winning the Canadian Triple Crown is no easy feat because not only do all three races vary in length, they're also run on different surfaces (Tapeta, dirt and grass). And the Breeders' Stakes, a 1 1/2-mile turf race , will present Mighty Heart with arguably his stiffest challenge.

Then again, Mighty Heart's sire, Dramedy, won the 2015 Grade 2 Elkhorn Stakes on the grass at Keeneland.

"We don't expect them (distance, grass surface) to be (an issue)," Carroll said. "My concern is weather because if we get a lot of rain it could be a very soft course and that changes things for everybody."

This report by The Canadian Press was first published Oct. 6, 2020