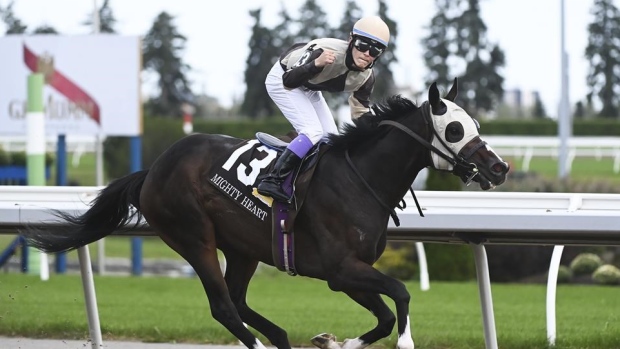 TORONTO — Mighty Heart, the Queen's Plate and Prince of Wales champion, tops the list of 12 horses that were nominated to the $400,000 Breeders’ Stakes.

A victory in 1 1/2-mule turf race Oct. 24 at Woodbine Racetrack would make the one-eyed colt the first winner of the OLG Canadian Triple Crown since Wando in 2003. Woodbine Entertaintment released the nominations Friday.

"It would be a great thing to accomplish, I'd certainly be thrilled," said Hall of Fame trainer Josie Carroll, who conditions Might Heart. "It's very seldom you get a horse that's genuinely capable of winning these races on all three surfaces and that makes it very exciting."

The connections of the 12 horses all made a sustaining payment to remain eligible for the third and final leg of the '20 Triple Crown.

Another $5,000 payment or supplementary fee of $12,500 will be due upon entry. The entry box closes and post positions will be drawn to finalize the field for the Breeders’ Stakes on Oct. 21.

Also nominated was Belichick, another horse trained by Carroll that was second to Mighty Heart in the Queen's Plate. Mighty Heart and Belichick were both scheduled to work Saturday at Woodbine in preparation for the Breeders’ Stakes.

"(Saturday) will be Mighty Heart’s first breeze since he ran in the Prince of Wales," Carroll said. "So as long as everything goes well, we’re pointing in that direction (towards Breeders')."

Clayton, who was third in the Plate and second to Mighty Heart in the Prince of Wales Stakes, also looks to complete the Triple Crown circuit.