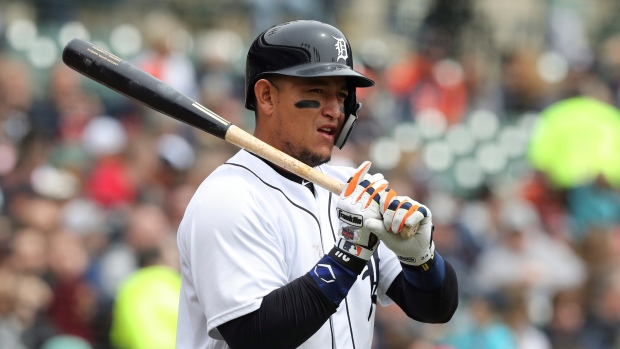 DETROIT — These last few seasons have been difficult for Miguel Cabrera.

Now, the Detroit slugger has a chance to remind baseball fans just how much he's accomplished in his career.

It's been a while since Cabrera resembled the player who was the American League MVP in 2012 and 2013. The last time he was really impressive with the bat was in 2016, when he hit .316 with 38 home runs. From 2017-19, he played just 304 games as an assortment of injuries limited his availability.

In the meantime, the Tigers entered a major rebuild, trading away many of their top players. Cabrera is still on the team, which says a lot about his declining production and huge contract. He turns 38 in April.

But nobody should forget what a spectacular hitter he's been through much of his career. Only a half-dozen players have reached both 500 homers and 3,000 hits: Hank Aaron, Alex Rodriguez, Albert Pujols, Willie Mays, Rafael Palmeiro and Eddie Murray.

“He wants to play first. I didn't know he voiced it near as much as I learned after I even said it," Hinch said. "My plan for him is to make an opportunity for him to be a little more of a complete player, and not just fall in the DH category.”

Cabrera said he's talked to Nelson Cruz about some of his work habits — the 40-year-old Cruz is still one of the game's top home run hitters. Cabrera is also keenly aware of where the Tigers are as a franchise right now. Detroit's fortunes these next few years will likely rise and fall with the performance of several young prospects.

That means Cabrera could play an important role as a mentor.

“What I learned the past two years as a veteran is, I need to talk more. I always say, I talk the way I play in the field, but right now, we’ve got a lot of young guys, they ask you some questions," Cabrera said. "Trying to teach what I learned in my career.”

Cabrera hasn't been an All-Star since 2016, but when his career is over, he'll be remembered for his enthusiasm and playful personality in addition to his hitting prowess. That part doesn't seem to have changed.

“I love playing baseball," he said. "I love having fun in the field. I love going out there every night.”

So as Cabrera begins his 19th big league season, his team is hoping he'll have some happy moments to look forward to in this one.

“I'm going to develop a good rapport with him," Hinch said. "So we get to celebrate his individual accomplishments that are coming, but we do it in a win.”