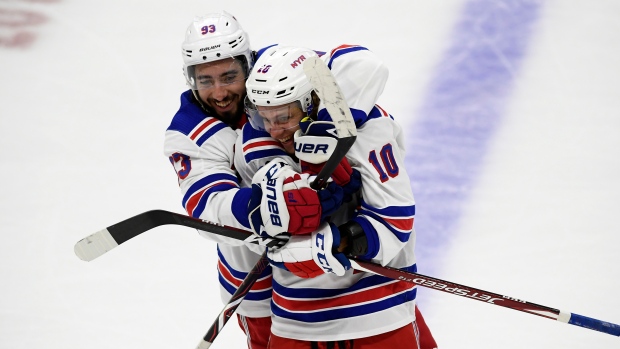 OTTAWA — Mika Zibanejad knows he won't always be averaging four points a night, so he's going to make the most of his torrid start to the season while he can.

Zibanejad is only the second player in Rangers history to record eight points through the first two games of the season.

"I can't really explain what's going on right now," said Zibanejad. "I'm playing with good teammates and unbelievable players out there. I'm getting a lot of chances and now they're going in so I'll try to take advantage as that as much as I can."

Artemi Panarin also scored for the Rangers (2-0-0), while Alexandar Georgiev stopped 31 shots in his first start of the season.

Brady Tkachuk had the lone goal for the Senators (0-2-0), who played the first of a four-game homestand. Craig Anderson made 26 saves.

The Senators have now given up nine goals through their first two games, and rookie head coach D.J. Smith put the team on notice.

"I thought a lot of guys played hard, there was some guys that played hard out there, let's not get it wrong that it was everyone," Smith said. "There's just some guys that didn't play at the level they have to play and that won't be acceptable. You'll either drop down a line or you won't get to play."

The Senators know there will be growing pains this season as they adjust to a new system, but defenceman Thomas Chabot said that is no excuse for their poor effort against the Rangers.

"We didn't work hard enough, our power play didn't work well either so those are all things we control and we know we can do better," Chabot said. "This is in our hands. We have to look at ourselves and make sure we're ready for next game."

Panarin made it 4-1 with a power play goal early in the third off a great pass from Zibanejad.

The Senators managed to generate some pressure in the third, but Georgiev was solid.

Zibanejad owned the Senators in the second period, scoring twice to complete the hat trick.

The 26-year-old made it 2-1 for the Rangers as he completed a beautiful give-and-go with Pavel Buchnevich.

"Sometimes that line looks like they're playing a video game and it's hit a couple buttons and it's tape-to-tape, back door and it looks pretty," said New York defenceman Marc Staal. "It's a huge advantage to have them playing like that and then having a power play that's scoring like that."

Zibanejad scored his third of the night when he pulled up to avoid a sprawling Erik Brannstrom and beat Anderson blocker side for a short-handed goal.

"This is where I started, where I got the first opportunity to play in the NHL and I'm really thankful for that," said Zibanejad, who was drafted sixth overall by the Senators in 2011. "To come here and do that (hat trick) I think is a night I'll remember for a long time."

Zibanejad opened the scoring on a first-period power play as he picked up a rebound out front to beat Anderson. The Senators tied the game at the 12-minute mark as Tkachuk tipped a Thomas Chabot shot from just inside the blueline.

Prior to dropping the puck, the Senators announced they will retire Chris Phillips' No. 4 on Feb. 18. Phillips is the Senators all-time leader in games played at 1,179. He officially retired in 2016. He joins Daniel Alfredsson as the only other modern era player to have his number retired.

With four days off before their next game, against the St. Louis Blues Thursday, the Senators plan to make the most of the practice days.

An area of concern will be the power play, as the Senators went 0-for-5 against New York.

"Sometimes you take it as a privilege to be on the power play and I didn't think we worked hard enough, I didn't think we were hungry enough," Smith said. "On loose pucks we got beat, we got beat up bad in the faceoff circle so they cleared the puck and it was tough to enter. There was a lot of things that weren't great. We were better five-on-five."

This report by The Canadian Press was first published Oct. 5, 2019.