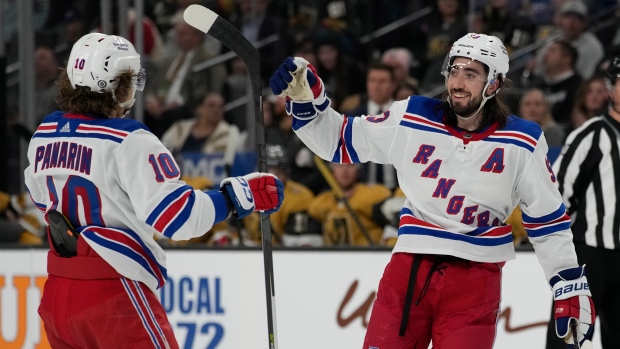 LAS VEGAS (AP) — Mika Zibanejad had two goals and an assist, and the New York Rangers scored three times in 1:54 in the third period to beat the Vegas Golden Knights 5-1 on Wednesday night.

New York's Artemi Panarin reached 600 career points, picking up his milestone point when he found Zibanejad, whose one-timer from the left circle put the Rangers in front 2-1 at 5:59 into the third. Panarin reached that number in his 535th game, and only Connor McDavid (421), Sidney Crosby (430), Alex Ovechkin (464) and Evgeni Malkin (490) have gotten there quicker.

The Rangers, who scored four times in the third period, are 7-2-1 in their last 10 road games.

They broke open a 1-all tie with the three-goal onslaught. After Zibanejad scored, Filip Chytil and Alexis Lafreniere added goals in the game-changing stretch. Zibanejad added another score with 8:26 remaining, and has points in six consecutive games (five goals, four assists).

“We come to a building that's loud, to a team that's really good, and we've got 1-1 going into the third on the road,” Zibanejad said. “So we just regroup and see this as a good opportunity to get two points, and that's what we did.”

New York's scoring backed Igor Shesterkin, who saved 25 of 26 shots and improved to 12-4.

“He's always strong for us, and he had a real good, solid game when he had to,” Rangers coach Gerard Gallant said. “I just thought it was a team win tonight. Everybody came ready to play from the fourth line to the last defenseman.”

Logan Thompson, saved 25 of 26 shots through the first two periods. He finished with 32 saves on 37 shots.

“We put ourselves in a good position after the second period to get back into the game,” Knights coach Bruce Cassidy said. "Then we mismanaged the puck. Then it snowballs. It was an issue all game. ... We weren’t very good at managing the puck in the third.”

New York dominated the play in the first period, outshooting the Knights 15-5. The one shot that got through occurred 6:50 in when defenseman K’Andre Miller shot from the point and Kaapo Kakko tipped in the puck.

Vegas (19-8-1) came off a 3-1 road trip and looked like a team with jet lag. But this wasn't a one-time thing. The Knights have been outscored at home 14-4 over their last three games and lost all three.

Vegas was without leading scorer Jack Eichel for the second straight game because of a lower-body injury. Defenseman Alex Pietrangelo missed his fifth consecutive game because of personal reasons.

“We’ve been in New York, too, so it was same hours,” Shesterkin said. “I thought they would shoot more, but they didn’t have Eichel and Pietrangelo tonight, so two key guys for this team. But we did a great job tonight. A lot of blocked shots.”

Vegas played with more energy in the second period, taking advantage of a 5-on-3 power play. Chandler Stephenson, from in front of the net, made a sensational pass to Jonathan Marchessault, who scored from the left side. Marchessault has scored in three consecutive games.

It was just the fifth power-play goal the Rangers have given up.

Vegas defenseman Shea Theodore extended his points streak to four games (one goal, four assists). He also has 10 points in 10 games (one goal, nine assists). ... Gallant was Vegas' first coach and led the Knights to the 2018 Stanley Cup Final their first season. He went 118-75-20 over 2 1/2 seasons. ... The Knights wore specialty jerseys during warmups as part of Hispanic Heritage Night. The jerseys featured flags from several Hispanic countries.

Rangers: At the Colorado on Friday.