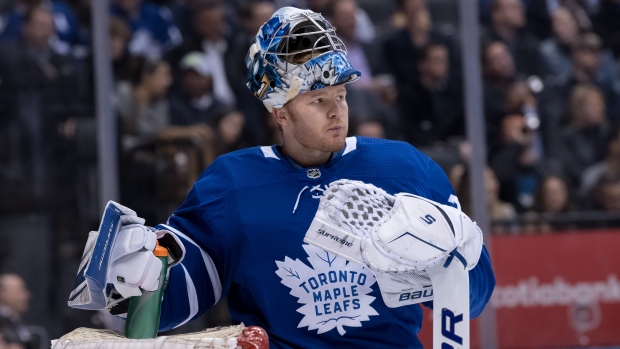 TSN Toronto reporter Mark Masters checks in daily with news and notes on the Maple Leafs. The Leafs (optional) and Blue Jackets (optional) skated at Scotiabank Arena on Monday morning.

In the Mike Babcock era, the Maple Leafs have consistently started Frederik Andersen in the first game of a back-to-back set with the No. 2 goalie always going on the second night. So, it will be Andersen facing the low-scoring Jackets (2.25 goals per game, 30th in NHL) on Monday while Michael Hutchinson will play in Boston on Tuesday.

This week the Leafs face a challenging schedule with two sets of back-to-back games, including Friday against San Jose and Saturday in Montreal. The second games, both against divisional opponents, would seem to be more important.

"Let's just do the math here," Babcock said of the goalie rotation, "because you guys ask me about this all the time. So, if you can imagine, if you lose game one and then went to game two tired (shrugs) I don't know. So, the investment makes no sense to me whatsoever."

But Babcock's rationale goes beyond just wanting to win that first game.

"Freddie gives us the best opportunity to win," Babcock told TSN during a pre-game interview last week. "I also believe it's important for him to play with our team while it's fresh. I think how he feels is real important for our group."

Down the hallway, that's a sentiment shared by Columbus coach John Tortorella.

"Goaltending basically determines a lot of the winning and losing of games," Tortorella said, "and how tall your team is, how short your team is at certain times ... the mindset of a club, it's worked off of that."

Freddie with the ball 🏀 pic.twitter.com/Phd7ghUpJX

Morgan Rielly passed Toronto's player-of-the-game basketball to Andersen on Saturday night after his 43-save win over Boston.

"He's very calm," observed Rielly. "He's calm with the puck, even his body language is a calming influence on guys. It's nice when he’s in a zone and feeling it. He's a leader in that sense."

The Leafs are a young team built on speed and skill. The group is still maturing and breakdowns have been frequent early in the season as a new-look defence builds chemistry.

"When we make our mistakes he's the guy we always look to try and save us," said winger Mitch Marner, "and he does it a whole lot of the time. So, he's always got that swagger in him and when that’s going I think our whole team just feels a lot better."

The points against Boston and Montreal this week are important, but perhaps having Andersen in a groove is more important for the greater good of the team.

"Some nights you get out-chanced and you win," noted Babcock. "The other night I'm watching Chicago play Columbus ... [Robin] Lehner there, they had five grade-A [chances] in the first five minutes, unbelievable. I look back, I don’t know what I did, I came back a little bit later and the score's 1-0 at that time for Chicago, I’m just (shrugs), they call it hockey, but that was goaltending."

The problem, however, for the Leafs is they want to rest Andersen beyond just the 13 back-to-back sets this season and to do so they need the back-up option to be reliable. Hutchinson remains an unproven commodity. He played just five games for the Leafs last season and is 0-1-1 with an .886 save percentage so far this season.

This week Hutchinson is projected to face Tuukka Rask and a rested Bruins team on Tuesday night and then Carey Price and a rested Canadiens team on Saturday night. After the loss last week in Washington, Babcock referenced a statistic that a tired team beat a rested team only 29 per cent of the time.

"There's so many factors that are out of your control," Hutchinson said, "but, at the end of the day, my game doesn’t change whether you’re playing the second game of a back-to-back, my job's just to stop the puck and give the team a chance. So, that’s my mindset going into each game."

The cap-strapped Leafs don't have an obvious option should Hutchinson falter. His cap hit is $700,000 so any replacement would likely need to be in the same range. In the minors, Kasimir Kaskisuo is off to a strong start with the Marlies, but has never played in the NHL.

Babcock has been reluctant to criticize Hutchinson preferring to keep the focus on the team.

"Well, it's an important week for all of us," Babcock said when asked about the significance of these games to his No. 2 goalie. "We're in it together."

The Leafs have been in a position to win both of Hutchinson's starts leading Montreal 4-1 in the third period and then squandering a 2-0 lead in Washington thanks to a disastrous middle frame.

"Our last back-to-back, we had a push in the third, we weren't tired,” Babcock pointed out, "so our second period wasn't on back-to-back, it was on us."

Babcock acknowledges that back-to-back sets tend to be tougher early in the season when players aren’t quite in a rhythm or in mid-season condition. Toronto has already had two back-to-back sets and now will have two in six days, which is unusual.

Marner is stressing the need to get sleep and stay hydrated.

"It's going to be new for me," he said of the condensed schedule this week. "I'm sure a lot of other people haven't done it in the locker room either. I just think we have to be smart with our decisions on ice and make sure we're playing a safe game and not bring any extra pressure to ourselves with turnovers."

Hutchinson, meanwhile, hopes to benefit from seeing the Bruins up close on Saturday.

"They're a skilled team and they can make plays, but another part of their game is they crash the net really hard," he noted. "You saw Freddie get bumped a couple times last game, so on top of being able to make some skilled plays they also like to throw the puck on and crash the net hard. As a goalie, you just have to be ready for everything."

Hutchinson insists his game's in good shape despite the unsightly numbers.

"I felt good with where my game's at," the 29-year-old said, "I feel like I'm competing well, and trying to make saves to give the team a chance to win. The results haven’t been there yet, but I know if I just keep working and doing what I’m doing they will come."

Andreas Johnsson left Saturday's game against Boston after taking a Brandon Carlo shot off his leg. The X-rays came back negative, but the gritty left winger missed Sunday's practice.

"It was a big bruise," Johnsson explained after taking a twirl on the ice Monday morning, "got some treatment yesterday and now I’m good to play...It's kind of funny with hockey, you can play with a lot of injuries and this is probably one of the smallest you can have so it’s not a problem."

Does it still hurt?

Did he want to stay in the game Saturday?

"Kind of weird," he explained, "a lot of pain in the beginning and when you're still warm you can run on the adrenaline, (but) then I went on the ice and didn’t feel as a great as I wanted to so better to be safe, it's a long season."

Babcock was asked what's allowed undersized players like Dmytro Timashov and Trevor Moore, both 5-foot-10, to have success early in their NHL careers.

"They got big asses," the coach noted to chuckles from some reporters. "You laugh, but it's the truth. You can get under people, you can win retrieval races, you can own lanes, you have good balance."

While Moore played 32 NHL games last season, the 23-year-old Timashov is getting his first taste of the big leagues and has impressed early on scoring his first goal on Saturday.

What stands out to Marner, who was drafted 121 spots ahead of Timashov in 2015?

"His shot. Even in practice and stuff like that his shot has always been a good one. I’ve been with him since Day 1, really, since after the draft so his shot’s always been something and his skill with the puck, both of them together, it’s pretty deadly and you saw it the other night."

But the key to staying in the lineup, especially once Zach Hyman returns, is doing the dirty work.

"What I like about him is he's nasty," Babcock said on Saturday night. "He hits everything that moves and he's heavy on the puck, he's on the forecheck all the time."

"He works extremely hard and he’s a great forechecker," said Rielly. "When you watch his game that’s not what jumps out at you first, but when you go back and watch it again he’s hard on their d-men. And obviously he’s got a great shot as we all saw. He’s been passing the puck great and he’s been working hard and really carved out a role for himself, so it’s cool to see."