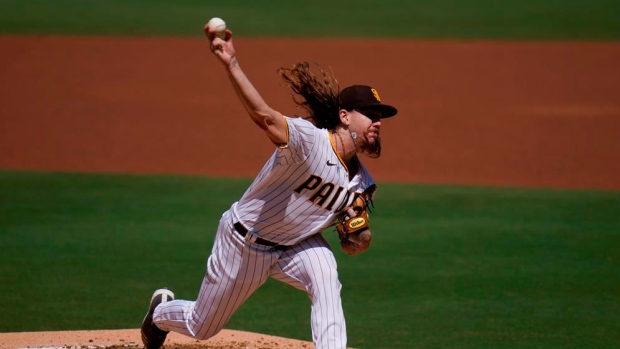 SAN DIEGO — Right-hander Mike Clevinger of the playoff-bound San Diego Padres lasted only one inning in his start against the Los Angeles Angels on Wednesday.

The team said the right-hander's departure was unplanned but didn't provide any other information.

Clevinger's start had been pushed back from Saturday night because of tightness in his right biceps. Manager Jayce Tingler said on Tuesday that the right-hander threw a bullpen session on Monday and seemed good to go for Wednesday afternoon's start. A few days earlier, Tingler held out hope that Clevinger might even be able to make two more starts before the regular season ended, if even if the second one was brief.

Clevinger, obtained in a blockbuster trade with Cleveland on Aug. 31, breezed through the first inning on 12 pitches, including striking out Mike Trout and David Fletcher.

Rookie Adrian Morejon began warming up in the bullpen while the Padres batted in the bottom of the inning and came out to start the second. Morejon allowed a two-run home run to Shohei Ohtani and solo shots to Justin Upton and Anthony Bemboom that gave the Angels a 4-2 lead.

The Padres have clinched their first playoff berth in 14 seasons and their magic number remains at two for clinching homefield advantage in the wild-card round next week.