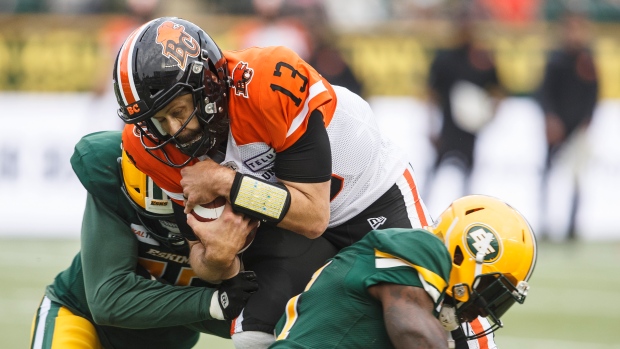 EDMONTON — Greg Ellingson came alive before it was too late on Friday.

Trevor Harris threw three touchdown passes, including two to Ellingson, as the Eskimos overcame a bad start to spoil former quarterback Mike Reilly's return to Edmonton with a 39-23 victory over the B.C. Lions.

Ellingson finished with nine catches and 174 yards, including a touchdown late in the second quarter to help the Eskimos erase a 14-point deficit.

"We started the first quarter pretty slow and kind of just needed a jump so it was nice to be part of kick-starting the offence a little bit in that second quarter," Ellingson said. "We were down, but the saying is, 'Don't flinch.'

"That's something we didn't do and we put together drives and made sure we finished the game and the defence balled out."

"We're excited about this 2019 version of the Eskimos and the way these guys are playing and believing in one another, working hard for each other, it's something special right now," Eskimos head coach Jason Maas said.

"I couldn't be more thrilled and more happy for that group of guys in that locker-room, playing for one another and believing in each other."

Edmonton had 409 yards in net offence, while the Lions had just 202 despite having an early 17-3 advantage in the contest.

"We came out and played good football in the first quarter and we gave them a good punch," Reilly said.

"But they countered back and we just never got off the mat after that. We've got to figure out how to fight through when things get a little tough and aren't going our way. That's been the problem the last couple weeks."

The Lions struck first, eight minutes into the opening quarter, when Reilly found Lemar Durant for a seven-yard TD pass, followed with the two-point conversion. B.C. added a 30-yard field goal by Sergio Castillo for an 11-0 lead soon after.

Edmonton responded with a 44-yard field goal by Sean Whyte late in the first quarter.

The Eskimos continued to shoot themselves in the foot with penalty after penalty to start the second, leading to a 25-yard Castillo field goal, and then a fumble recovery by Lions defender Davon Coleman added another 36-yard kick through the uprights for a 17-3 lead.

However, the Eskimos would come storming back.

They then took a 20-17 lead into the half on a three-yard TD pass from Harris to Ellingson with just six seconds left in the second frame.

B.C. tied the game back up to start the third with a 50-yard field goal.

Harris put the Esks back in front midway through the third with a two-yard QB keeper.

The Lions responded with a 45-yard field goal.

The third quarter closed with a massive 54-yard TD pass from Harris to Ellingson, followed by B.C. conceding a safety on its next possession.

Whyte then got a 27-yard field goal with six minutes to play.

Edmonton's seventh sack of the game turned the ball over on downs deep in Lions' territory, allowing the Eskimos to run out the clock.

Both teams are on the road next week as the Eskimos play in Winnipeg on Thursday and the Lions are in Calgary next Saturday.

Notes: The Lions' last victory in Edmonton came on July 13, 2013… During his six-year stint with the Eskimos, Reilly amassed 26,929 passing yards and 143 TDs and also ran for 3,040 yards and 45 touchdowns, leading Edmonton to a Grey Cup title in 2015… Reilly is one of 13 former Eskimos players on the Lions roster... Former Denver Broncos tight end and pro football Hall of Famer Shannon Sharpe was in attendance to do the opening coin toss.