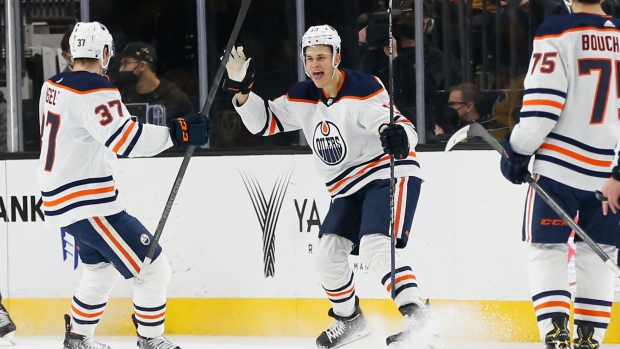 Koskinen’s win total is tied for the NHL’s best this season. Ryan Nugent-Hopkins, Zach Hyman and Jesse Puljujarvi scored for the Oilers, who won for the fourth time in five games to climb back into first place in the Pacific Division.

“They’re a close team,” Edmonton coach Dave Tippett said. “The guys we’ve brought in have enhanced our group. The chemistry of the group is really solid. With some of the injuries we’ve had, we’ve found out a little about our depth.”

Chandler Stephenson and Reilly Smith scored for Vegas, while Robin Lehner made 27 saves.

Edmonton pushed its lead to three goals when Evan Bouchard sent a rink-length pass into the offensive zone, where Puljujarvi entered on a breakaway and beat Lehner to snap an eight-game goal drought with his seventh of the season.

Stephenson responded with his third goal in three games, whipping past two defenders and finding a leak between Koskinen and the post. Vegas got within a goal when a loose puck in front of Koskinen was batted in by what replays appeared to show Jonathan Marchessault connecting with a backhand, but was credited to Smith for his ninth goal of the season — tied for the team lead.

The Oilers have now won their first two meetings with the Golden Knights, both in Vegas.

“We’re putting ourselves in a good spot, for sure,” Nugent-Hopkins said. “You can nitpick a little bit and say you want to improve here and there, but if you get the two points on a nightly basis, that’s what you’re looking for.”

The game started with brilliant performances by both goaltenders over the first 17 1/2 minutes, but a pair of Golden Knights turnovers did Lehner no favors in a span of 1:54 late in the period.

First, Nugent-Hopkins kept the puck on a 2-on-1 rush and went far side to beat Lehner for his second goal of the season and 498th career point.

Then, with 16 seconds left in the first, Hyman fought off Vegas’ Mark Stone as they entered the zone, and beat Lehner with a backhand for his ninth goal of the season and 200th career point.

“It’s the odd-man rushes that kills you,” Lehner said. “I don’t think that’s typical Vegas hockey. It’s been a little more this year but we obviously had some adversity (with injuries). We’re starting to get guys back. We have to recognize who we’re playing against. It’s probably the best transition team in the league. Zero-zero with two minutes left in the first and a couple odd-man rushes.”

It marked the eighth straight game the Golden Knights were either up or down at least 2-0.

After going on a 10-3-0 stretch to claw its way up the Pacific Division, Vegas has now lost two of its last three as it heads back out of town for a two-game road trip.

“The stretches in the game tonight where we stuck to the plan and did that I thought we exposed some really good opportunities for ourselves and should’ve had a chance to win,” Golden Knights coach Peter DeBoer said. “I told our team between periods when you’re playing good teams, it’s whoever can stick to their game for the longest amount of time. You can’t get away from it for 10 or 12 minutes against a team like that because you’re down 2, 3-nothing.”