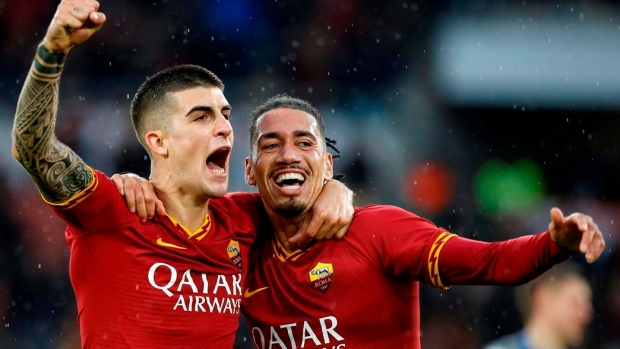 Serie A sides Roma and Milan announced on Thursday that newspaper Corriere dello Sport would be banned from any media activities with the two clubs for the rest of 2019 following a headline reading "Black Friday" featuring photos of Giallorossi defender Chris Smalling and Inter striker Romelu Lukaku ahead of Friday's match between the two clubs.

"We believe that players, clubs, supporters and the media must be united in the fight against racism in football and we all have a responsibility to be very precise in the words we choose and the messages we deliver," the two clubs said in a statement.

“You guys keep fueling the negativity and the racism issue, instead of talking about to the beautiful game that’s going to be played at San Siro between two great clubs," Lukaku wrote. "Education is key. You guys of Corriere dello Sport should do a better job at that."

Smalling also weighed in with displeasure.

“Whilst I would have liked to spent the day focusing on the big game tomorrow, it is important that I acknowledge that what occurred this morning was wrong and highly insensitive," wrote the England international on loan from United. "I hope the editors involved in running this headline take responsibility and understand the power they possess through words, and the impact those words can have."

The newspaper defended its headline, though, noting that the message of the story - previewing the encounter between former Manchester United teammates Smalling and Lukaku on Friday - was anti-racist in tone.

“A nice thought a day keeps the doctor away," wrote editor-in-chief Ivan Zazzaroni (as translated by Football Italia). "Armies of right-minded people flock to the web these days, to turn their beautiful souls white. Having identified the racist on duty, go, two strokes on the keyboard and the stain is gone. You feel like the better man in a better world. White, black, yellow."

Milan and Roma acknowledged the anti-racist bent of the story, which is why its ban wasn't any longer than the rest of the year.

Serie A has been plagued by racism this season and in recent years with Lukaku and Brescia striker Mario Balotelli victims of abuse from fans in recent weeks.