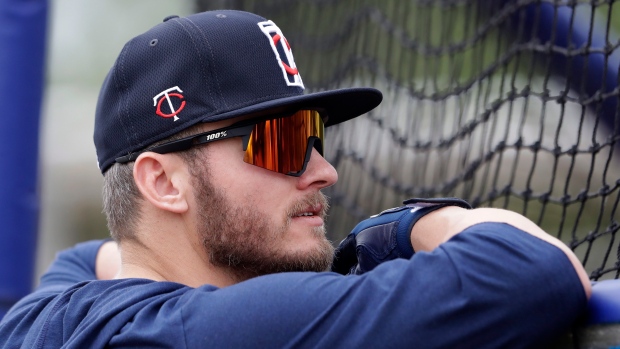 MINNEAPOLIS — Minnesota Twins third baseman Josh Donaldson will miss the best-of-three AL first-round series against Houston because of a nagging injury to his right calf, and the team included rookie Alex Kirilloff on the roster that was set on Tuesday prior to Game 1.

Donaldson missed 30 games this season with a muscle strain and returned to the lineup on Sept. 2, but he was removed from Friday's game after the first inning with cramping. The 2015 AL MVP award winner worked out with the team on Monday, but he was still experiencing soreness and unable to fully push off on his leg.

“Didn’t want him to push if he was feeling something that he could potentially do some long-term damage to," Twins president of baseball operations Derek Falvey said, adding: "He wasn’t ready to go this series, and we felt the best thing to do was to continue to get him treatment and see where hopefully it is after this series if we’re lucky enough to move on.”

Centre fielder Byron Buxton, who also had to leave the game on Friday after getting hit by a pitch in the head, was cleared of his mild concussion symptoms and in the lineup against the Astros.

Kirilloff was the team's first-round amateur draft pick in 2016. He has never played above Double-A but showed the club he was ready with strong performances at the team's alternate training site this summer. He can play the corner outfield positions and first base, giving manager Rocco Baldelli additional flexibility with Donaldson out.

“He doesn’t seem to let very much affect him at all. Another guy that just worries about the things that he can control and that’s it. I talked to him last night on the phone, chatted with him for a little while and then also happened to mention that he’s going to make our playoff roster, and the tone on the other end of the line did not change a ton,” Baldelli said. “I think he said, ‘Oh yeah? That’s awesome,' and that was essentially it and that’s exactly what I expected to get from him.”

The Twins kept 15 position players and 13 pitchers on their 28-man roster, including a fourth catcher, Willians Astudillo, who has played every position but shortstop over parts of three seasons with Minnesota. Right-handers Jake Odorizzi and Randy Dobnak were included on the staff, for longer relief options. Odorizzi made only four starts due to multiple injuries. Dobnak made 10 starts but was sent to the alternate training site earlier this month after some struggles.

Like the Twins and Kirilloff, the Astros put outfielder Chas McCormick on their roster despite him never previously appearing in an MLB game. Manager Dusty Baker said McCormick was included for defence and potential designated runner duties. McCormick was drafted in the 21st round in 2017 and split last season between Double-A and Triple-A.