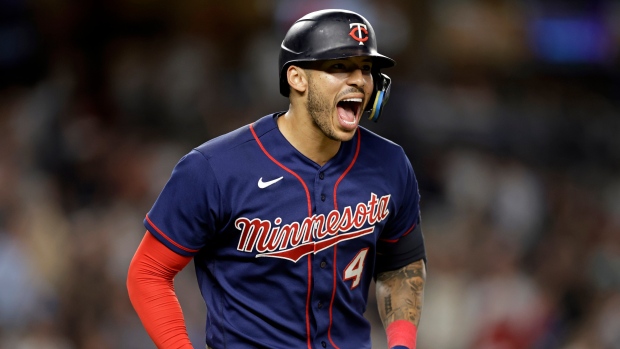 Within five days after the conclusion of the World Series, Minnesota Twins shortstop Carlos Correa can opt out of the remaining two years of his three-year, $105 million deal.

The two-time All-Star says the decision as to whether or not to opt out is an easy one.

"The decision, it’s very simple,” Correa said after Wednesday's season finale. “I’m going to have some conversations with the front office here and see where their headspace is and where they’re at in terms of...I talked about marriage in terms of building a long-term relationship, and then we go from there. But we all know — you know the game enough to know what my decision is going to be like."

The Ponce, Puerto Rico native says that he and his family have been happy with their decision to come to Minnesota.

“I love this team," Correa said. "I love this organization. My wife loves it here, loves it in Minnesota. Loves all [his teammates'] wives. She is very happy there. My wife's happiness is my happiness. But at the same time, I want to make sure that my son and my family are taken care of. Hopefully, the Twins can see the player that I am, the person that I am, the passion that I have for this game and the love that I have for this game. And we can get into some serious conversations.”

Should Correa head to free agency, he would be one of a number of high-profile shortstops available on the open market alongside Trea Turner of the Los Angeles Dodgers and the Atlanta Braves' Dansby Swanson.