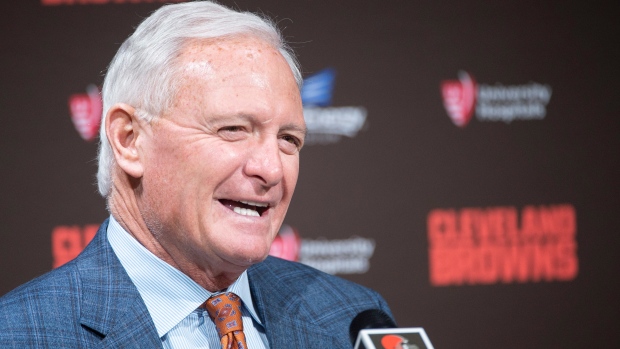 At least not publicly,

Looking for a general manager to pair with Stefanski, the Browns interviewed Vikings assistant general manager George Paton for the second time Wednesday for the job opening. Paton and Stefanski worked together for 13 seasons in Minnesota and could be reunited in another NFL city.

Paton spent most of the day at the team's headquarters in Berea, Ohio, but left in the evening for Minnesota without being offered the job.

Appearing at the Greater Cleveland Sports Awards a few hours later, Stefanski wouldn't say if he has convinced Paton to join him.

“We're working through that process and we're going to make sure we take our time and are methodical about it,” said Stefanski, who received a loud ovation in his first interaction with Cleveland fans before presenting the top professional athlete award to UFC heavyweight champion Stipe Miocic.

Stefanski said it remains to be seen if the team will interview any more candidates. To this point, the Browns have met with three: Paton, Eagles vice-president of football operations Andrew Berry and New England college scouting director Monti Ossenfort.

Berry worked in Cleveland's front office from 2016-18 and was well-liked by owners Dee and Jimmy Haslam, who have made a strong alignment between the coach and GM a priority to avoid some of the internal squabbling and power plays that have undermined the franchise's growth.

A Paton-Stefanksi connection could ease a seamless transition for the Browns, still putting the pieces together following a 6-10 season, which ended with the firing of coach Freddie Kitchens and GM John Dorsey leaving after declining an offer to take a lesser role in the organization.

Paton has passed on opportunities to leave Minnesota for GM openings in the past. Stefanski wouldn't identify his friend as a favourite.

“We've brought in some really good candidates,” he said. "I don't want to single anybody out. I just know that Dee and Jimmy have done their due diligence to make sure that we bring in some really qualified people and again getting to get them in our building and talk to them and understand that shared vision that we all have, I think it's been a good process."

But the Browns seem to have zeroed in on Paton, the only candidate they've met with twice.

"I don't think we have a timeline, but I think we're huddling up and having a lot of good discussions and see where it goes," Stefanski said.

Paton has worked alongside Vikings GM Rick Spielman for most of his career. They were together in Chicago and Miami before joining the Vikings in 2007. During their 13 seasons together in Minnesota, Stefanski and Paton went to the playoffs six times and twice went to the NFC Championship.

The Browns have a talented roster, built by Dorsey, but the team lacked chemistry and discipline this season, forcing the Haslams to make yet another coaching change. Kitchens' dismissal seemed inevitable when the team faded from playoff contention but Dorsey's dismissal — the team framed it as a mutual parting — was a surprise.

As he helps the Browns find a GM, Stefanski is still assembling his staff. He confirmed he has hired former Raiders coach Bill Callahan as his offensive line coach to plans to retain a few others, including special teams co-ordinator Mike Priefer and running backs coach Stump Mitchell.

Stefanski has not yet decided whether to hire an offensive co-ordinator. It's expected he'll hire San Francisco defensive backs coach to run his offence, but that can't be official until after the 49ers play in the Super Bowl.

Stefanski has quickly gotten a taste of some of the drama Kitchens dealt with last season. Last week, star wide receiver Odell Beckham Jr. made headlines following some troubling behaviour after cheering on LSU in the national championship game in New Orleans.

Beckham handed money to Tigers players on the field and later was caught on video swatting a security officer on the buttocks while in LSU's locker room. A misdemeanour warrant was issued on Beckham but later dropped when the officer decided not to press charges.

Stefanski said he'll meet with Beckham on Thursday to outline his expectations for all his players. He said it would be unfair to make any judgments about a player he doesn't know.

“I don’t have a relationship yet with Odell, so we need to sit down and get to know each other,” he said. “He needs to get to know me, I need to get to know him, and then we’re going to move forward with our eyes ahead to 2020.”