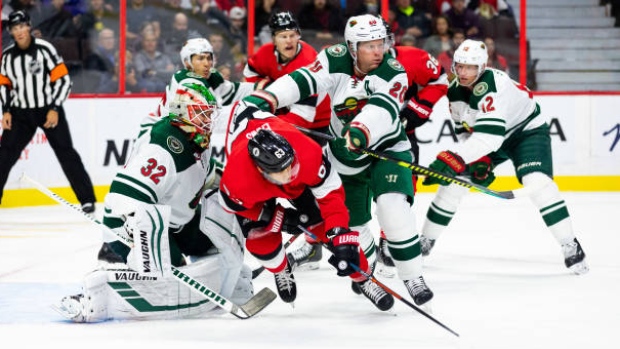 OTTAWA — The Minnesota Wild stuck to their defensive plan Monday and it paid off to give them their first win of the season.

Alex Stalock stopped all 26 shots he faced for his sixth career shutout, and the Wild held Ottawa off the scoreboard through five power plays in a 2-0 win over the Senators.

"I think the biggest thing was commitment to playing team defence," said Wild head coach Bruce Boudreau. "When the puck was in our zone it was stops and starts. We gave up chances, but you're going to give up chances every game to an NHL team.

"It's a good start. I don't want to put anybody down or anything, but we're not going to score five goals every night so we've got to hold teams to one or two and if you do that you usually have success."

Victor Rask and Zach Parise scored third-period goals for the Wild (1-4-0), the last team to pick up a point in the league.

"We needed to get into that win column and fortunately we did (Monday), said Parise. "We know we've got a tough game Tuesday against Toronto, but there is a sense of relief that we won a game."

The Senators, playing the finale of a four-game home stand, dropped to 1-4-0.

Craig Anderson stopped 34 shots for the Senators, who left for a three-game road trip following the game.

Ottawa has yet to score on the power play this season and is 0 for 17 overall.

"Last game we had some chances," said Senators head coach D.J. Smith. "(Monday) we might have had one good power play I thought. Just not enough chances going towards the net. I didn't think we worked hard enough to get pucks back and to stay on pucks and that's something that has to change."

Smith said the team will look at changing personnel on the power play unit to see if that could change the dynamic.

The Senators were coming off a 4-2 victory over the Tampa Bay Lightning Saturday night and had hoped to build off that momentum.

"We did get some confidence from the other night," said Anderson. "Coming in I thought we were playing the right way. We had some golden opportunities and just weren't able to capitalize."

Monday's game lacked flow from the start and the teams were scoreless through two periods until the Wild broke the stalemate midway through the third. Rask had a great takeaway on Jean-Gabriel Pageau and then beat Anderson shortside.

"I was just hoping for that first break," said Boudreau. "I thought that either team got that first goal that with our records they would have dug in and it would have been tough to beat so I'm glad it was us."

Parise added an empty-net goal to seal the win after the Senators failed to take advantage of their fifth power play late in the game.

Ottawa pulled Anderson to have a two-man advantage but failed to register a shot on goal.

Bobby Ryan felt there was a lack of execution on the part of the power-play units.

"When you're a power-play guy you kind of put it on your shoulders and take it a little too personally at times," said Ryan. "You overgrip the stick, you overanalyze every pass and I think sometimes you just have to forget and just play and get three, four guys going to the net and find a way to get an ugly one."

There was a scary moment for the Senators late in the second as Anderson took a skate in the head when Jason Zucker fell after being tripped by Thomas Chabot. Anderson remained in the game.