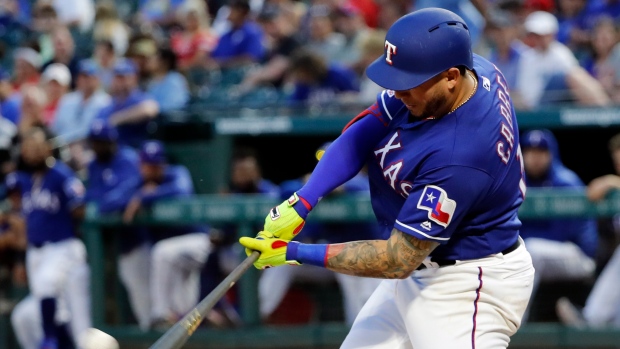 ARLINGTON, Texas — The Texas Rangers had Mike Minor on the mound and their big bats were going deep. That was just enough to hold off the Seattle Mariners.

Minor struck out 11 with only one walk and set a ballpark record for consecutive scoreless innings before leaving after six innings with 107 pitches, and Asdrúbal Cabrera hit two of the five Texas homers Monday night in a 10-9 victory after having an eight-run lead.

"It wasn't until the sixth when I looked up and I saw 96. I didn't think I had that many pitches honestly," Minor said. "The way that I felt and the way I was throwing the ball, the numbers didn't reflect how I felt, I guess."

While he wanted to go deeper in the game, Minor (5-3) reached 29 innings in a row at home without giving up a run before Seattle, down 7-0 at the time, scored twice in the sixth. The lefty's scoreless streak is the longest by any pitcher ever at the Rangers' ballpark that is in its 26th and final season.

Hunter Pence, Joey Gallo and Rougned Odor also went deep as Texas matched its season high for homers for the second time in five games. The Rangers twice had back-to-back homers in a game for the first time in 10 years.

"Yeah, that's how you draw it up," manager Chris Woodward said. "You've got your best pitcher on the mound, he goes out and gives you six pretty good innings and punches out eleven, and your offence scores five in the first inning. Scores 10 in the game."

Tim Beckham had five RBIs for Seattle, including his first career grand slam in the eighth to chase Shelby Miller, in his first relief appearance since losing his spot in the starting rotation. Daniel Vogelbach's two-out, two-run homer was part of a three-run ninth.

Texas went ahead to stay with a five-run first inning off Mike Leake (3-5), when Odor hit a three-run homer before Cabrera followed with a solo shot that snapped an 0-for-13 slide and was his first RBI in 12 games. Cabrera led off the fourth with his second homer of the game, and ninth of the season — all at home.

Pence hit a two-run blast in the seventh, measured at about 449 feet deep into the Mariners bullpen in left-centre. Gallo followed with his 14th homer, an opposite-field shot that just cleared the wall into that bullpen and made it 10-2.

Minor had a career-high 13 strikeouts at Seattle in a 15-1 win on April 27, which started the current stretch of 16 losses in 21 games for the Mariners.

"You could tell some of those guys were almost looking for the changeup at times, and the fastball was beating them," Woodward said. "So what he had done to them in the past, the last game, had something to do with what they were looking for this game."

Ryon Healy's sacrifice fly plated the first Seattle run and Beckham had a two-out RBI single before Minor struck out the last batter he faced.

Leake allowed seven runs and 11 hits over five innings. Texas tagged him for nine runs and 10 hits in five innings last month, when he was also matched against Minor.

"That's just who they are," Seattle manager Scott Servais said. "The Rangers swing the bat."

Minor allowed six runs in 4 2/3 innings in the season opener for the Rangers, but didn't allow a run over 24 innings in his next three home starts. He surpassed C.J. Wilson's record of 25 2/3 consecutive scoreless innings (2009-10) at the Texas home ballpark with his first two innings against Seattle.

Mariners: Vogelbach came in the game for Healy, who left the game because of a low back strain.

Mariners: Veteran lefty Tommy Milone is set to make his first start of the season for Seattle. After seven seasons with five teams, he signed a minor league deal with the Mariners in December and went 4-2 with a 3.83 ERA in nine games (eight starts) at Triple-A Tacoma.

Rangers: RHP Lance Lynn (5-3, 4.94) makes his 10th start of the season. He is 2-0 with a 2.08 ERA in two career starts against the Mariners, including April 28 when he allowed one run and five hits over seven innings at Seattle.