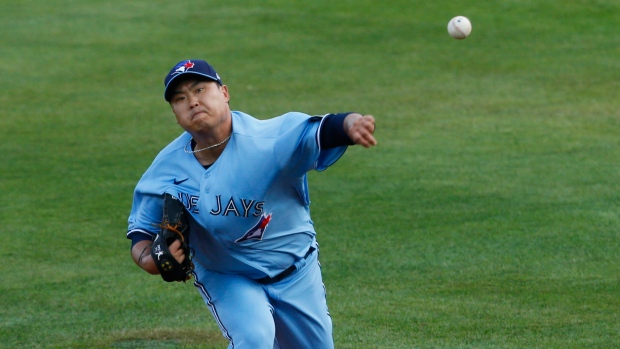 TORONTO — When the 2019 season came to a close, the Toronto Blue Jays front office did nothing to hide their desire to improve the rotation.

Then they went out and did something about it.

Ten months later the group of five is completely different, as none of them were in Jays uniforms a year ago.

The way-too-early verdict? Much improved, but it hasn’t exactly been smooth sailing through the first 15 games of 2020.

After posting an ugly 5.25 ERA as a rotation a season ago — good for 22nd in baseball — the Jays rotation has undoubtedly improved, both in terms of current results and future projection.

Through three weeks and 15 games, manager Charlie Montoyo’s rotation is 13th in baseball with a 4.34 ERA.

The issue, however, is Montoyo’s starters have been handled carefully in the early going, tossing just 66.1 innings thanks to a mix of strict pitch counts and postponements.

But it still isn’t a good thing when only the virus-ravaged Miami Marlins (48.2) and St. Louis Cardinals (24.2) have gotten less innings out of their starting pitchers.

That’s something that is likely to change moving forward, with GM Ross Atkins stating earlier this week that it will be a priority to get the starters more work and normalize their routines as much as possible.

“The longer layoffs are more challenging for obvious reasons,” Atkins said. “But, I think at this point, we need to get our starters closer to a little bit more of a normal routine and all of them getting more work.”

With all that being said about the collective group, let’s take a look at how the starters have fared individually.

Ryu’s first month as a Blue Jay has been a mixed bag, but overall there are signs that the 33-year-old Korean will end up with numbers that will satisfy the people who ponied up $80 million in December for a new staff ace.

That’s not an ERA title like Ryu claimed in the National League last year, but a sub-3.50 ERA and the consistency he provides every fifth day will be enough.

His last start was intriguing to watch, as Ryu went away from his changeup-heavy, down-and-away approach by elevating more fastballs with some success.

He’s clearly tinkering, and he’s doing with a little less velocity than last year at 89.8 mph on his average heater, compared to 90.7 mph in 2019.

Dialling in the command will be key for the detail-oriented lefty.

The gloves behind him did him no favours, but Pearson’s third MLB start on Wednesday night in Buffalo was by far his worst.

Command and location have been the inning-to-inning issues for Pearson early on, which is hardly surprising for a young pitcher with just three starts at Triple-A under his belt prior to this unique season.

Across 12.1 innings, Pearson, who has relied for the most part on his fastball/slider combo, has walked nine batters and allowed a pair of home runs.

The expected flashes of brilliance and nastiness have been there, but the consistency hasn’t, and Pearson has looked like exactly what he is: a rookie trying to figure out the best hitters in the world for the first time.

The stop-and-start nature of the last three weeks has not helped starting pitchers and Pearson should be able to settle into a bit more of a routine with 28 games in 27 days starting Friday.

Don’t ride the wave of the start-to-start results, just give it time.

That’s how Roark’s Jays’ debut has gone after twirling five innings of one-run ball against the Washington Nationals on July 28, and then having to wait nine full days for his next turn.

That allows us to take Roark’s command troubles last Friday in Boston — five walks and two meatballs that ended up over the wall — with a grain of salt.

Once again, however, Roark will be throwing Friday’s series opener against the Tampa Bay Rays, giving him another six full days off between outings.

While it’s only been two starts, most concerning is Roark’s velocity drop, as the 33-year-old’s average fastball has fallen from 92.1 mph last year to just 87.9 mph, with his sinker averaging 89.1 mph.

With the weird schedule and all of the variables at play with the time players were given to prepare for this shortened season, Roark could just be easing in. But trouble with location and loss of velocity isn’t a recipe for success.

Truthfully, we do not yet know a whole lot about Anderson or what he’ll bring to this rotation.

There’s also a chance he’s the first one bumped if the front office feels Anthony Kay or Thomas Hatch would be better served with some run as a traditional starter.

Anderson has the feel of a new-age arm that can be deployed in different situations, either as a low-inning total starter or a bulk reliever behind one of the younger arms.

With a pitch limit, Anderson debuted Saturday in Boston and the fastball averaged 92.6 mph, down from last year’s 93.3 mph in Milwaukee.

When the Jays acquired the 32-year-old right-hander from the Brewers, there was talk of a pitch-mix tweak being one of the keys to unlocking a bit more upside, so we’ll need a whole lot more data than one truncated start off an oblique injury to get a feel for Anderson.

Against the Red Sox, Anderson completely ditched the sinker he’s used his entire career, instead relying on his curveball, cutter and change as his secondaries.

Anderson gets the Rays on Saturday at Sahlen Field, but will likely be limited to around 60 pitches after throwing 45 in his first outing.

Two pretty good starts and one stinker has Shoemaker carrying a 4.86 ERA and the home run ball has been the issue for the 33-year-old veteran.

Across just 16.2 innings, The Cobbler has allowed five bombs, which can ruin a pitcher’s day in a hurry.

Never homer prone prior to this season, expect Shoemaker’s home run rate to flatten out eventually, but most of the damage has come on his sinker.

The splitter has been excellent in the early going with an .097 batting average against that pitch, but Shoemaker’s sinker has been destroyed for three homers, a .438 average and a gaudy 1.125 slugging percentage.

On the bright side, the righty is working with some extra velocity, with that sinker averaging 91.7 mph after sitting at 90.5 last year.

At this point, Shoemaker, a free agent at the end of the year, is kind of proving he is what he is: A capable back-end starter on a competitive team.

Trent Thornton is working his way back from right elbow inflammation and could progress to throwing off a mound next week.

When Thornton is ready, the Jays might have a rotation decision to make, but these sort of problems usually have a way of solving themselves.

If everyone is healthy, Thornton could return as a starter in a tandem scenario with Anderson, which might be an ideal way to get them some innings as well as limit the exposure a third time through a lineup.

The point here is the Jays finally have some options and aren’t checking the waiver wire every time a starter is needed.

Hatch, Kay, and even Ryan Borucki, who’s currently excelling in a traditional reliever role and should probably be left alone, could be options for spot starts later this month. The first two names are fully seen as rotation options for 2021 and beyond.