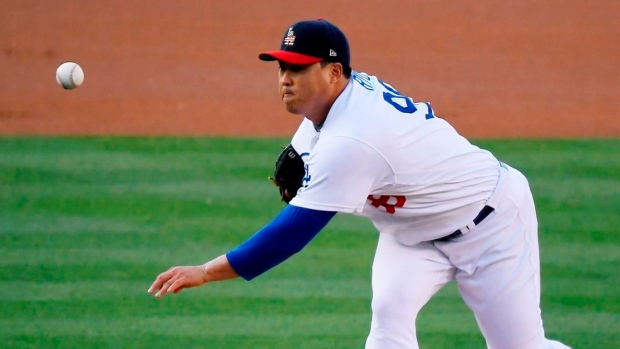 SAN DIEGO — If Hyun-Jin Ryu is truly the apple of the Toronto Blue Jays’ eye, the developments on the first day of the 2019 MLB winter meetings did not do them any favours in that chase.

You can thank Stephen Strasburg and his lucrative reunion with the Washington Nationals for that.

With Strasburg choosing to remain with the World Series champs, it leaves the obvious big market power players — the New York Yankees, Los Angeles Dodgers and Los Angeles Angels — chasing the lone ace left on the market, one soon to be very, very rich Gerrit Cole.

Two of those teams will be left out in the cold.

Well, they’ll have about $300 million in extra resources kicking around and obvious rotation holes to fill.

The next three names in the starting pitching pecking order are Madison Bumgarner, Ryu, and to a lesser extent Dallas Keuchel.

Two of those teams desperately zeroing in on Ryu won’t help Jays GM Ross Atkins when it comes to trying to get the 32-year-old lefty who finished second in National League Cy Young voting this past season to commit to Toronto.

The good news on that front is there’s growing optimism that Cole will choose his new home this week, which should kick the rest of market into motion.

The bad news is twofold.

The price for starting pitching, always an expensive proposition, seems to be even more exorbitant than usual, perhaps because 30 general managers around baseball watched the Nats and Houston Astros ride aces to the World Series.

There’s also the fact that the relationship between this front office and Boras is an icy one, although money and extra term have a way of quickly repairing those relationships.

As usual, Atkins was playing his cards close to the vest when he met with the media Monday evening at the Manchester Grand Hyatt in downtown San Diego, site of this year’s annual baseball gathering.

“It certainly gets people’s attention,” Atkins said of the Strasburg contract. “That’s an exciting deal. We’re happy for him. Anytime a player gets compensated at these levels, it’s a good thing. We have a strategy, we continue to work through it and we feel very good about it. In any market, you have to have some level of agility, as well, and we’ll factor it in as one piece of the puzzle.”

When the Jays’ rotation puzzle will be completed is anyone’s guess, but many of the pieces that seemed to be fits at the start of the off-season are no longer on the table, and the impactful ones that are left might end up being deemed too costly in the end.

With three more days to go at the winter meetings, the pitching search continues.

“We feel that we’re in a good position to make our organization better,” Atkins said. “There is certainly time left, there’s opportunities left on the trade front and the free-agent side. We feel very, very good about the work that’s being done to be prepared to not only make offers on the trade and free-agent front, but be in good position for them to be accepted.”

For obvious reasons, the Blue Jays front office does not publicly state payroll budgets, but there’s intrigue surrounding how much money Atkins actually has to spend this winter.

Including the $14 million in dead money owed to the now-retired Troy Tulowitzki, the Jays’ payroll for 2020 is currently hovering around $64 million, according to the always-reliable Cot’s Baseball Contracts.

Atkins wasn’t shedding any light on the numbers when I asked him Monday if he expects to run a nine-figure payroll next season, which would mean spending $35-to-40 million this winter.

“That's a very specific question that has a lot to do with our strategy,” Atkins said. “That is something that I'm uncomfortable talking about just because it could influence our ability to execute it.”

SHAW ON THE RADAR

As soon as Travis Shaw was non-tendered by the Milwaukee Brewers last week, he immediately seemed like an obvious fit for the Jays and their gaping hole at first base.

Shaw hit 30-plus homers in both of those seasons, piling up 7.1 fWAR and playing very capable defence at third base.

The ability to play both corner infield spots, as well as dabble at second base in an emergency, is appealing, especially with Vladimir Guerrero Jr.’s questionable glove, as well as the fact the club feels that the 20-year-old’s workload needs to be managed carefully with days off and DH time.

While the Jays could offer Shaw nearly an everyday role at first base, he’s been much better against right-handed pitching over the course of his five seasons, posting an .810 OPS against righties, versus a .679 OPS against lefties.

There’s sure to be other suitors, but that ability to guarantee first base at-bats could sway Shaw over a potential platoon role elsewhere.

Atkins said they could fill the first base spot in multiple ways.

“It could end up being someone more versatile that’s added or someone that is more likely to be in that 1B/DH role,” Atkins said. “We’ve talked a lot about versatility and being able to use that spot as valuable, but we’re not going to close ourselves off to someone if they could make a big enough impact in that spot.

“It could be a route where we’re using multiple people there, not just the people who are here, but also adding to that in some way.”

NEW HEAD TRAINER COMES FROM WITHIN

His experience extends far beyond just his time with the Blue Jays.

Ministral started in baseball as a minor-league intern with the Pittsburgh Pirates in 1998, spending 14 years with the organization in various capacities, including six seasons as the athletic trainer of the Pirates’ Triple-A affiliate.

Huffman surprisingly left the Jays in October and has started working with athletes privately, one of them being former Blue Jay Marcus Stroman, a relationship that dates back to their time at Duke.​