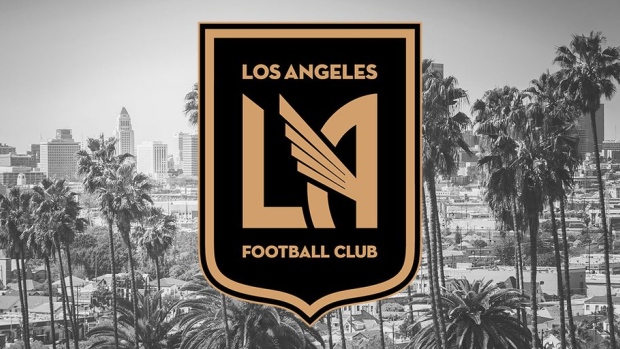 LOS ANGELES, Calif. - Shortly after LAFC revealed its black-and-dark-gold colours and eye-catching new crest in a gala ceremony, Will Ferrell carried a director's chair onstage and sat down between co-owner Peter Guber and Mayor Eric Garcetti.

"I want in," LAFC's 25th and newest co-owner declared.

This is a common sentiment in downtown Los Angeles, where the Major League Soccer expansion club is already attracting plenty of attention more than two years before anybody officially kicks a ball.

LAFC unveiled its colours and crest Thursday at Union Station amid cheering and singing from several dozen fans of a team that has no players or stadium yet. The club will join MLS for the 2018 season, but it already has an identity built around those colours and a logo featuring a wing incorporated into an Art Deco-inspired "LA" monogram.

"Our promise is to unite the world's city with the world's game," LAFC President Tom Penn said.

LAFC managing partner Henry Nguyen said the colours and crest are a major part of the club's aspiration to create an internationally known brand. While black has been part of LAFC's identity from the start, the club's shade of dark gold appears to be unique in the league, and LAFC also plans to incorporate red as an accent to its schemes and uniforms.

"The wing is such a special symbol of what this city is, in terms of meaning, flight, dynamism," Nguyen said. "This is the City of Angels. And it's every type of wing. It's an Aztec eagle wing. It's a dragon wing. It's an angel wing. It's whatever wing you want it to be."

Garcetti, who envisions Los Angeles as "the sports capital of the world" while it competes for the 2024 Olympics, heralded the next step in the evolution of LAFC, which was formally granted MLS entry 15 months ago. The club is building Los Angeles' first open-air stadium since 1962, playing a part in the Olympic bid and adding even more energy to the city's revitalized downtown.

"We're not going to wait for any other league to make a decision, because football is here today," Garcetti said, jokingly referring to the NFL's protracted decision about returning to the nation's second-largest media market.

Penn said LAFC's branding work began even before its stadium situation was finalized.

"Once we solidified that we were in the heart of Los Angeles legitimately, with our brick and mortar, we wanted to build around the moniker of L.A., because it's globally recognized," Penn said. "It's very aspirational. What you learn when you talk to people overseas, L.A. is just an aspirational place to be."

While the branding is a major part of the LAFC endeavour, other aspects are also surging forward for the deep-pocketed ownership group that includes Magic Johnson, Nomar Garciaparra and Mia Hamm, backed by Malaysian moguls Vincent Tan and Ruben Gnanalingam.

Nguyen revealed the club expects to begin demolition of the Los Angeles Sports Arena shortly after getting full entitlements in May. LAFC will build its $250 million stadium on the site next-door to the historic Coliseum.

Until then, LAFC will use its image and merchandise to keep Southern California in anticipation. The star power of its ownership group won't hurt, either.

Ferrell, a longtime soccer aficionado who starred in the not-quite-a-classic soccer comedy "Kicking and Screaming," joined the ownership group because his children play soccer with another LAFC co-owner's kids.