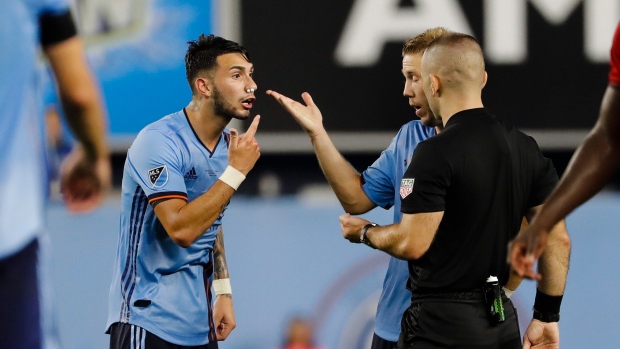 Toronto FC, New York City FC and both their coaches have been fined following an incident in stoppage time of the MLS teams' 1-1 tie at Yankee Stadium on Wednesday night.

Referee Chris Penso was surrounded by players from both sides in the Toronto penalty box after NYCFC forward Valentin Castellanos' face was bloodied by defender Chris Mavinga's flailing arm as both chased a ball headed towards the Toronto goal in the 94th minute.

NYCFC wanted a penalty but Penso had already blown the play dead, penalizing Castellanos for grabbing hold of Mavinga's jersey in a bid to slow his progress.

Mavinga was yellow-carded on the play.

The MLS disciplinary committee found both teams in violation of the league's "mass confrontation policy." Because it was a second violation for both sides, they were fined an undisclosed amount — as were head coaches Domenec Torrent of NYCFC and Greg Vanney of Toronto.