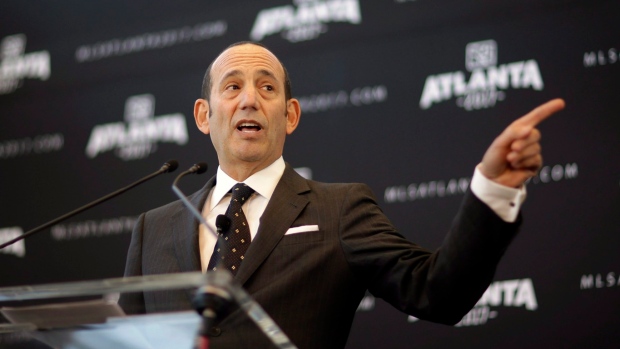 Major League Soccer and its players' union agreed in principle to a five-year labour contract, establishing free agency for the first time and averting a possible strike ahead of Friday's season opener.

The deal, the culmination of talks that began last weekend in Washington, D.C., was announced Wednesday night and would replace the contract that expired Jan. 31.

Under the agreement, players 28 and older could become free agents if they have eight seasons of MLS service and their contracts have expired, a person familiar with the details said. The person spoke on condition of anonymity because the details had not yet been announced.

Each team's salary budget will rise from $3.1 million last season to about $3.5 million this year. Only a portion of the salaries of high-priced designated players count against the budget.

"This agreement will provide a platform for our players, ownership and management to work together to help build Major League Soccer into one of the great soccer leagues in the world," MLS Commissioner Don Garber said in a statement.

"We are pleased to finally turn our fans attention back to our players and the competition on the field as we get started on the 2015 season," Bob Foose, executive director of the MLS Players Union, said in a statement.

In Montreal, Impact goalkeeper Evan Bush was glad a strike was averted even if the Impact players were among the teams that voted against the proposed agreement.

He said the players hoped for more access to unrestricted free agency, but called the agreement a "stepping stone" that will lead to that in future.

"At the end of the day, no one wanted to miss games," said Bush. "We're happy we'll play this Saturday (at D.C. United).

Midfielder Patrice Bernier said "there's a system now that allows certain players to be free and have a choice. That's good. At least we have that now."

MLS's 20th season begins this weekend, with the defending champion Los Angeles Galaxy hosting Chicago in the opener. The Fire travelled to California on Wednesday for the match.

Orlando and former FIFA Player of the Year Kaka host New York City and former Spanish World Cup champion David Villa on Sunday in the debut of the expansion teams that raise the league's total to 20 teams.

The league and the U.S. Soccer Federation are in the first year of eight-year broadcast agreements with ESPN, Fox and Univision Deportes that they hope will increase MLS's exposure and ratings.

MLS was established as a single entity in which the league owns all players' contracts. While stars such as Seattle's Clint Dempsey earn up to nearly $7 million, half the league's players last September had salaries under $100,000, according to the union.

The previous labour contract, in 2010, was reached five days before the season opener. This deal, like the 2010 agreement, was reached with the assistance of the Federal Mediation and Conciliation Service. MLS has never had a work stoppage.