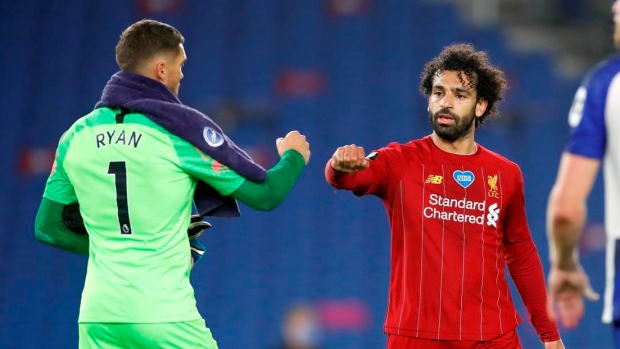 BRIGHTON, England — Liverpool forward Mohamed Salah stepped up his bid to win the Golden Boot for a third straight season by scoring twice for the champions in their 3-1 win over Brighton in the Premier League on Wednesday.

Salah moved onto 19 goals and is three behind the league's top scorer, Leicester striker Jamie Vardy.

The Egypt international won the Golden Boot in his first year at Liverpool in 2017-18, and then shared the trophy with teammate Sadio Mane and Arsenal's Pierre-Emerick Aubameyang last season.

Salah wasted a couple of great chances late in the game to clinch his hat trick as Liverpool climbed to 92 points. The newly crowned champions need to win three of their final four matches to set a record for most points in a single top-flight season, which is currently held by Manchester City with its 100 from the 2017-18 campaign.

Jordan Henderson scored Liverpool's other goal, in the eighth minute, to build on the opener from Salah two minutes earlier.

Leandro Trossard replied for Brighton in the 45th minute, but Salah made the game safe with a near-post header from a corner by substitute Andrew Robertson in the 76th.