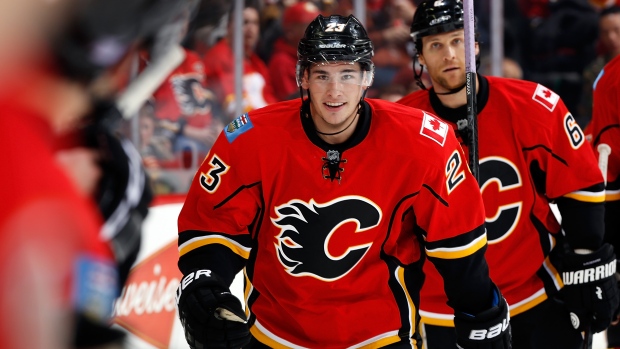 CALGARY - Sean Monahan burst onto the scene as a rookie with the Calgary Flames last season with six goals in his first eight games.

Through eight games this season, Monahan had just two assists and no goals, despite the fact he was second on the team with 20 shots.

Monahan's goal-less drought ended on Wednesday as he scored his first two goals of the season to lead Calgary to a convincing 5-0 win over the Carolina Hurricanes.

"Obviously it's been quite a few games now," said Monahan, who was named the game's first star. "I want to contribute, to help get wins, and I think that was a big relief for me tonight."

Linemate Joe Colborne helped set up both of Monahan's goals.

"Sooner or later, a guy with that skill is going to break out," said Colborne, who leads the Flames with eight points — all assists — through nine games. "I was just happy I was able to be a part of it. All the boys on the ice and on the bench were happy for him. Right now, If I was a fantasy hockey player, I'd have him in the lineup for the next little while. He's going to get hot."

Jiri Hudler, the third member of the line, also had two assists for the Flames (5-3-1). Calgary coach Bob Hartley put the line together for the first time this season and the move paid off.

Goalie Jonas Hiller stopped all 16 shots he faced for his third straight win and first shutout of the season in front of 19,289 fans at the Scotiabank Saddledome.

"We spent most of the time in their zone so it was definitely not as tiring as other games I've played this year," said Hiller, who has stopped 99 of 101 shots he has faced over his past three games. "You could see out there that everybody was willing to compete and to sacrifice, even blocking shots until the end. Even in the third when we were up 5-0, guys were still working hard and then blocking shots. That's obviously a nice feeling."

Matt Stajan and Lance Bouma also scored their first goals of the season for the Flames, who bounced back from a 2-1 overtime loss they suffered at home to the Tampa Bay Lightning on Tuesday.

Although the Hurricanes (0-4-2) have yet to win this season, this is the first time they've been blown out. Three of their other losses were by a one-goal margin, while the other two were by two goals, including a 3-1 road loss to the Winnipeg Jets two nights earlier.

"It got away from us," said Carolina coach Bill Peters. "We got scored on the first shift of the second (period). I don't know what it was, but we didn't respond properly there. Too many freebies. Too many easy goals. Too much room. Too much time and space. It's not the way we've played, so it's disappointing."

Playing in just his third game of the season, Carolina goalie Cam Ward finished with 19 saves in a losing cause.

Ward turned aside a pair of point shots off the stick of Russell during a Calgary power play in the first period before standing his ground to stop a shot from the slot by forward Brandon Bollig.

At the other end of the ice, Hiller made a great glove grab to deny Hurricanes forward Jeff Skinner's break-away attempt.

Wideman opened the scoring when he blasted a point shot past Ward, who was screened by Glencross on the play, to give the Flames a 1-0 lead at 18:18 of the first.

Calgary continued that momentum after the break as Stajan one-timed a pass from Byron past Ward just 32 seconds into the second period.

Monahan then put the Flames up 3-0 at 4:14 of the second when he was the recipient of a nice back-door pass from linemate Jiri Hudler for an easy tap-in goal.

"When he has the puck, you've got to expect to get it back," Monahan said. "I was ready for it. I thought it would be coming and it was right on my tape."

Alexander Semin had Carolina's best chance to score in the second with just over eight minutes left in the period, but Hiller made a nice kick save with his left leg to keep the Hurricanes off the board.

Monahan counted his second of the game at 3:23 of the third when he settled a bouncing puck in the slot before backhanding a shot past Ward.

Less than two minutes later, Bouma drove hard to the net and tapped a pass from Josh Jooris into the Carolina net to put Calgary up 5-0.

Notes: The Flames paid tribute to the tragic events in Ottawa and Quebec by having everyone observe a moment of silence before George Canyon sang "O Canada." … Since sitting out Calgary's 5-2 road win over the Edmonton Oilers as a healthy scratch, Wideman has scored four goals and added one assist in seven games. Wideman has scored four goals in his past five games and all of the goals have been the first goal of the game for the Flames. … Hudler's assist on Monahan's goal in the second period was the 300th point of his NHL career in his 534th game. He added another assist on Monahan's second goal.